Labor Day is an American holiday, but today a German city gets a nod for finding a new way to tax those practicing the world's oldest profession.

Prostitution is legal in Germany and the income is taxable. Collection is not much of a problem at brothels, but getting tax payments from literal streetwalkers is more difficult.

Bonn officials, however, have come up with a way. 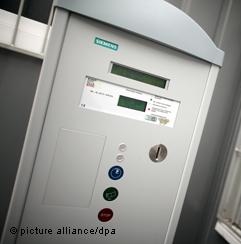 The city has installed automated pay stations in the area of the city where street prostitution is allowed. The machines, dubbed sex meters or sex boxes, are are converted parking meters and are equipped with emergency buttons in case of trouble,

For a 6 euro fee (around $8.70), sex workers can print out a ticket allowing them to work overnight. If questioned by police, prostitutes must have a current ticket. They get one warning, after which a ticketless curbside sex worker could be fined up to $145.

Bonn estimates that it will collect around 200,000 euros ($288,000 U.S.) a year from the meters. Other German cities are expected to install the machines.

One German working girl told Duetsche Welle that complying with tax laws via a sex meter isn't her biggest concern. The real problem is the recent drop in clients.

Reminds me of the Monty Python ep. wherein a bunch of gov't execs sit around the table discussing how they're going to tax "thingy." You know, "thingy."

Boy and I thought I was being bad with my sperm donor post on Forbes. Next thing you know we'll be having an X rated tax blog.