The gloves are coming off in the fight over online sales tax collection.

Amazon brought the battle literally to brick-and-mortar establishments in California this summer, sending representatives to storefronts to collect signatures on a petition to put the Golden State's new online sales tax law to the voters next year. 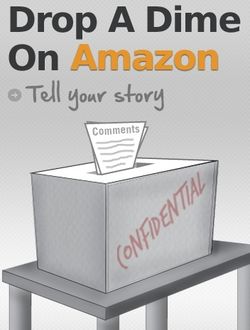 The Alliance for Main Street Fairness has launched "Drop a Dime on Amazon."

The Alliance, which is aggressively seeking nationwide enactment of online sales tax laws, has created a special Web page where it wants former and current Amazon employees, vendors and concerned citizens to "anonymously share stories and thoughts about the extreme lengths Amazon is undertaking to exploit the sales tax loophole, hurting jobs and small businesses."

The pro-onlline tax group contends that the information is necessary because "Amazon.com will do and say anything to maintain an unfair advantage over Main Street businesses."

Among the most egregious Amazon tactics from the Alliance for Main Street Fairness' point of view is Amazon's tactic of winning sales tax relief from states in return for building distribution centers.

That quid-pro-tax-quo worked in South Carolina and Tennessee. A similar trade-off was rejected by the Texas legislature, but Gov. Rick Perry, who's now seeking the Republican presidential nomination, vetoed the Lone Star State Amazon tax measure.

California, Amazon deal in the works? Meanwhile, California lawmakers also are working a revision to the online sales tax law which would require a two-thirds majority in both chambers and could nullify the ballot measure effort.

Such a law change, however, might not be necessary if Amazon can get the California legislature to accept its latest offer.

The Los Angeles Times reports that Amazon now is asking lawmakers to postpone the company's collection of sales tax until at least January 2014. In exchange, Amazon would hold the signatures it has already collected and drop its effort to put the repeal question on the state's June 2012 ballot.

The world's biggest e-tailer also would send its customers annual statements listing their total purchases and advising them that they owe California use tax on the goods.

And, true to form, Amazon has offered to build two fulfillment centers, one in Northern California and one in Southern California. The approximately one million square feet of floor space would cost up to $500 million and would employ up to 7,000 Californians.

The construction -- and jobs -- are contingent, of course, on the tax collection being at least postponed.

Will the bribe proposal work on the Left Coast?

"We're trying to find a way to not have World War III," one California retailer told the Silicon Valley Mercury News. "There seems to be real interest in reaching an accord."

But people familiar with the talks said that the association of California big-box stores that backed the sales tax law is not interested in cutting a deal with Amazon.

And a spokesperson for Darrell Steinberg (D-Sacramento), Senate President Pro Tem, was more circumspect. "It's an intriguing idea, but it's late in the session," said Alicia Trost. "There's a whole host of obstacles and no legislation yet."

I'm with Amazon. No online taxes!