Kids factor into taxes in a lot of ways, both good and bad.

First, the positives. There are many child-related tax breaks.

A dependent youngster is an added exemption.

For several years, the youth's parents can claim the child tax credit. Families with lots of kids might be able to get even more money back from the Internal Revenue Service via the refundable additional child tax credit.

If your family grows via adoption, there's a tax credit for that, too. 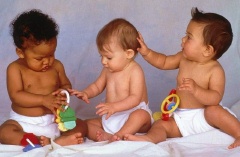 Who looks after all those kids when mom and dad head to work?

Check out the child care credit.

And if  you hire a nanny, then you have some added tax responsibilities.

The payout for the Earned Income Tax Credit, or EITC, is larger for eligible parents.

If you own your own business and hire your kids, you can save on some employer taxes.

And those college costs? Uncle Sam wants to help here, too, with a variety of education tax breaks.

And two recently were sent to jail for their false tax claims connected to children.

Davis Jackson was convicted in April of 11 counts of tax fraud that netted more than $1 million in bogus refunds.

Jackson, who ran his tax filing business out of his Bronx, N.Y., home, was sentenced on Sept. 7 to five years and three months in federal prison. Once he gets out, he faces another year of supervised release.

He also was ordered to pay $60,515 in restitution but he won't be able to earn the payback money as a tax preparer. The judge also prohibited Jackson from working in any tax preparation field.

Again it was tax ID numbers for kids. In Coronel's case, though, the children claimed on returns didn't exist.

Coronel, apparently inspired by the Octomom, admitted that in 2003 she got Social Security numbers for at 19 fictitious children that she claimed had been born to her at a Los Angeles hospital on Dec. 11, 2002.

Records from Good Samaritan Hospital show that instead of 20 kids, Coronel gave birth to one child, a son, on that day.

But once in possession of the extra tax ID numbers, Coronel claimed the fake children on federal tax returns for family members to get larger, illegal tax refunds.

Coronel's sentencing is scheduled for late November. She could get up to 18 years in prison for the three felony counts. She originally was charged with in a 35-count indictment. No word on the disposition of the other charges.

As part of its routine examination of tax returns, the IRS matches tax identification numbers, even those that aren't bunched on one single birth date, so it will eventually catch up to the scam.

Common sense kills this whole idea, since the last time I checked you can spend whatever money you want on whatever cause you want. It's even better when private citizens do it since it cuts out the wasteful gvmt middleman who takes .50 cents﻿ out of every dollar to run the bloated bureaucracy it is. It's all typical smoke and mirrors to try for the typical gvmt control over lives and money