No, not that rich Seattle guy with his ginormous philanthropic foundation. This time it's Rick Steves.

Steves, founder of the Edmonds, Wash.-based Rick Steves' Europe Through the Back Door travel conglomerate, has donated $1 million to his community's arts center.

Steves was able to share his wealth thanks to the success of his travel writings, tours, radio show and speaking engagements.

But he says the thing that's really allowed him to amass so much disposable wherewithal is the lower tax rates created by the Bush-era tax cuts. 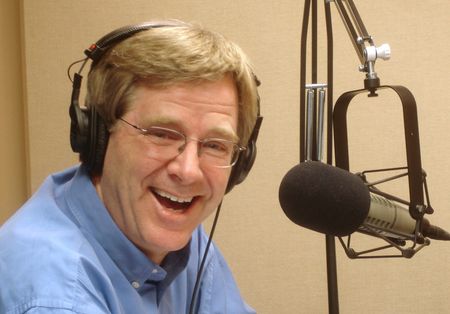 Steves on the air with his radio show, Travel with Rick Steves.
(Photo courtesy RickSteves.com)

Like the Oracle of Omaha, Steves questions the wisdom of giving those who already have so much even more in the form of lower tax rates.

But Steves also issued a challenge to his similarly wealthy peers.

"If you're fortunate enough to be doing well these days, figure out what recent tax cuts have saved you, then donate that amount to a deserving cause that you believe in," Steves said in a statement issued by his company.

Steves' $1 million donation will support and expand the Edmonds Center for the Arts' performances and community programs. Some of the money also will pay all of the facility costs for the Edmonds' Cascade Symphony Orchestra for the next 10 years.

He sees the gift as a balance to what he calls a "false austerity [that] is being forced on the finer points of our culture. Over the last decade, my tax burden has been decreased even as public funding for important local programs and institutions has been decimated, a trend I find alarming."

Of course, if Steves wants to, he probably will be able to deduct his charitable gift to the Edmonds' arts community. That, too, will help lower his tax bill.

And deducting charitable donations is a tax break that anyone who itemizes can claim.

That's one way that even we much poorer folks can get the same tax treatment as the ultra wealthy.