The so-called pole tax does not violate the clubs' free-speech rights, according to the Texas Supreme Court.

The legal battle has been underway since 2007. That's when the state's Sexually Oriented Business Fee Act took effect. The law imposes the extra charge on establishments that offer exotic dancing and serve alcohol. 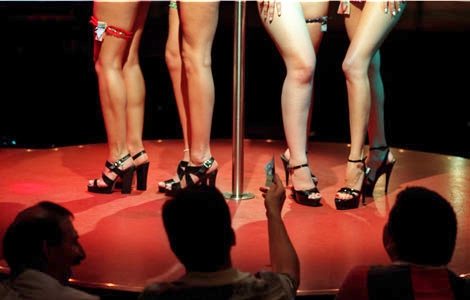 Although the fee is based on the number of customers, the businesses must pay it.

If I had to guess -- and guessing is what I'd be doing since I haven't visited a strip club (the Diamond Doll in Lubbock) since my days early in my career as a police beat reporter -- I'd say strip club patrons better bring some extra dollars to pay for drinks.

But back to court.

An Amarillo club owner and the Texas Entertainment Association went to court to invalidate the fee based on First Amendment protections, specifically freedom of expression.

At issue was the fact that the tax was imposed only in those situations in which the Comptroller "determined that the essence of the performance or transaction was live nude entertainment."

A couple of courts sided with the strip clubs. Last year the Lone Star State's high court agreed to hear the case.

Meanwhile, the state continued to collect the tax, about $15 million so far. The money, however, has just been stacking up in the state treasury while the lawyers have had at it.

With this Texas Supreme Court ruling, the funds could start going to programs that help victims of sexual assault. If more than $25 million is collected, the law calls for health care programs for uninsured Texans to get some of the pole tax proceeds.

That is, of course, unless the strip clubs decide to appeal to the U.S. Supreme Court.