That appears to be the case right now for many most all of the hardcore anti-tax Representatives and Senators. They swear that they will not support any tax increases and have a broad definition of what falls into that category.

But poll after poll indicate that the general electorate -- you remember those folks, Congress; they're the ones who vote for or against you -- wants the deficit math problem solved using both spending subtractions and tax additions.

Bruce Bartlett, a former member of the Ronald Reagan and George H.W. Bush administrations, has complied a list of 23 recent polls in which Americans overwhelmingly support tax increases as a way to reduce the deficit. 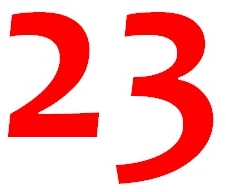 Bartlett has posted the polls and their results on his website Capital Gains and Games. And his collection is this week's By the Numbers figure.

Although it's impossible to know for sure, some of the survey respondents might have been part of the growing number of economists, financial analysts and corporate leaders from both sides of the political aisle who say that spending cuts alone cannot fix the United States' fiscal woes.

"Some studies by both liberal and conservative economists suggest that emphasizing spending cuts is better for long-term growth. But there are few if any precedents for paying down such a large debt solely through spending cuts," reports the New York Times.

Get ready for automatic slashing: But the poll results cited by Bartlett and the opinions of financial folks outside the Beltway have yet to convince the no-tax lawmakers to reconsider their positions.

That single-minded tax intransigence is likely to mean that the special bipartisan Congressional deficit committee -- you probably know it as the super committee or Super Congress -- is going to look mainly at spending cuts as it tries to raise at least $1.2 trillion to reduce America's deficit.

And that, along with the six-to-six political split on the panel, will mean that the automatic, and deep, spending cuts on a variety of programs near and dear to Republicans, Democrats and the apolitical average Americans nationwide just trying to get by will probably go into effect.

It will be very interesting to see what the polls will say when that happens.

Conservatives are skittish about tax increases, if only because the promised spending cuts never occur. Why don't we have some spending cuts first. My congressman, Rep. Cleaver (MO), never met a domestic spending cut he didn't oppose.

They want the tax increases today, then they want the spending cuts in the next yr..good blog..Its really very interesting post..

These pollsters are asking the wrong question.

If the pollsters asked the pollees whether they would want their own taxes to be raised as part of the deficit reduction compromise, the results would be very different.

It's very easy to get people to agree to impose burdens on other people.