Home Table of Contents Tax Tips Credits Deductions Refunds State Taxes Politics/Laws Tax Terms Archives
Summer jobs, and taxes, for teens
Polls on taxes tend to tell us what we already know: Most of us don't like them

What's wrong with the Democrats when it comes to budget negotiations?

On Tuesday I blasted Congressional Republicans for not being gracious winners when it comes to resolving the ongoing budget/deficit/debt ceiling battles.

Today it's the Democrats' turn to catch heat.

Shortly after Obama took office, progressives and the more liberal wing of the Democratic Party have been asking what's the deal? It seems to many that the prez has abdicated their ideals and programs in an effort to play nice with the loyal opposition.

Or, as the Washington Post's Ezra Klein notes in his blog today:

"Democrats control the White House and the Senate, Obama is the most popular national political figure, a balanced approach to deficit reduction outpolls plans made entirely of spending cuts, and yet Democrats are still offering recalcitrant Republicans the deal of the century rather than taking to the ramparts. What's wrong with them?"

That question is put into political perspective via one bar graph displaying the deficit-reduction deals passed by three former presidents and proposed by the current Oval Office resident: 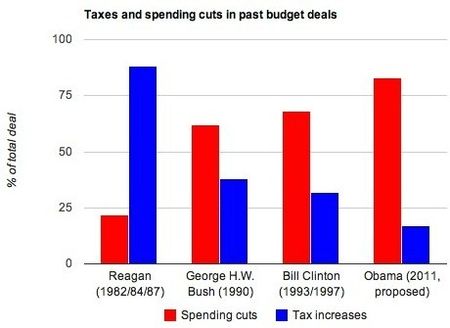 Hmmm. So Ronald Reagan, the president idolized by the GOP, the man who made hating government a national political sport, saw significantly more tax increases on his watch than a trio of his successors.

Want to tell your friends about this blog post? Check out the buttons -- Tweet This, Reblog, Like, Digg This and more -- at the bottom of this post. Or you can use the Share This icon to spread the word via email and online avenues. Thanks!