While Congress has been trying to assemble the debt ceiling puzzle, it wasn't able to put together the pieces necessary to continue paying for some key transportation programs.

Lawmakers failed to approve a Federal Aviation Administration funding measure by the midnight Friday, July 22, deadline. That means nearly 4,000 FAA employees are on furlough and projects at airports across the country are on hold.

It also means that several federal excise taxes collected from airline passengers are no longer in effect. 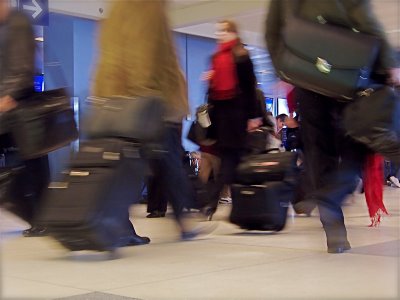 Depending on where you're going, the 7.5 percent tax on each domestic ticket purchase, as well as the $3.70 tax on each segment of your U.S. journey, could amount to a sizable chunk of your travel budget.

But before you start spending your unexpected tax savings, stop.

Congress' legislative negligence won't save most travelers a dime on their ticket prices. At least not immediately.

Why not? Airlines saw this coming and raised their airfares to make up the gap.

So instead of the U.S. Treasury getting the money, in most cases it will be going into airline bank accounts.

United, Continental, Delta, American, Southwest, US Airways, jetBlue and Frontier have all increased their fares instead of passing along the no-tax savings to travelers.

The latest reports from travel industry watchers say only Alaska Airline and Virgin America are sharing the tax savings with their passengers.

Refunds possible: You might, however, be able to eventually get back your ticket tax.

If you bought your ticket before the taxes expired, but you didn't actually board a plane until July 23 or later, you could be entitled to a refund of some or all of the federal aviation taxes that were collected when you booked your ticket.

Details on the refund process are not yet available. So hold onto your ticket stub and/or payment receipt.

It's unclear whether the ticket taxes that would have been collected will be retroactively paid to the IRS once Congress reinstates them, and believe me, the taxes will be back. If so, any qualifying refunds will likely come from Uncle Sam.

However, some airlines (jetBlue, for example) have told customers that they can request a refund for the taxes they paid by emailing the carrier.

The IRS, obviously trying to stave off airline passengers rightfully wanting their tax money back, has posted an announcement about the lapsed aviation taxes on its website:

The laws authorizing the airline ticket tax and other aviation-related taxes expired at midnight on Friday, July 22. The IRS continues to monitor pending legislation related to this issue. The IRS will continue to work with the airline industry to address issues relating to the collection and payment of the taxes involved. Taxpayers do not need to take any action at this time. The IRS will provide further guidance on this issue in the near future.

The emphasis is mine, but the IRS message is clear: We're as confused as all you fliers are right now, so please be patient.

You can keep checking the IRS website for updates, as well as with the airline with whom you recently flew.

And I promise a post on how to collect your payment of canceled airline taxes as soon as I learn anything.

Treasury's loss, airlines' gain: So just how much is Uncle Sam losing from uncollected aviation taxes? If the funding measure isn't acted upon soon, it could be a whole lot.

Thanks yet again, Washington, for nothing.

My tax-related travel plans: The airlines' greed has at least made me feel a bit better about the airline ticket I bought earlier this month. I purchased early to get a price break.

Of course, it's such a short flight -- from Austin to Dallas -- that it cost less, even including ticket taxes, than some of my utility bills. But my refund might get me a pastry to go along with my Starbucks frozen coffee drink.

And I have to confess that when it comes to air travel and this ticket tax situation, I'm more interested in airport staffing.

I'm not a good flier, even for short hops, so I'm thrilled to learn that although around 250 FAA workers in Texas are dealing with a forced holiday, air traffic controllers will be in towers in the Dallas-Fort Worth area and across the country.

I wish I could tell you that my trip is purely recreational. The truth is that I'll be attending a professionally focused IRS Nationwide Tax Forum. That's not a bad deal, though, since I do enjoy taxes more than a lot of folks. If you're a tax geek, too, there are still some sessions scheduled in San Jose, Las Vegas and Washington, D.C.

And although I'll be in hotel meeting rooms most of this week, don't worry loyal blog readers. I'll still post from the road, sharing some of the tax tidbits I pick up from the IRS and participating professional tax groups.

Heck, since it will complicate my life, I even expect Congress to finally get its act together on a debt ceiling deal while I'm away. When that happens, I'll get to those details, too ... as soon as the IRS sessions take a break.