It never hurts to be prepared. That's the thinking of freshman Rep. Daniel Webster. 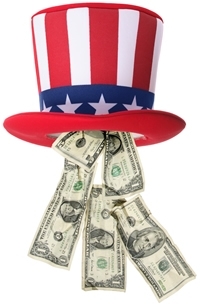 The Florida Republican has introduced the Prioritize Spending Act of 2011 (H.R. 2402) to, he says, "ensure America's priorities are preserved in the event that the debt ceiling is reached."

"It is important that while we fight for true spending transformations," said Webster in announcing the bill, "we also prepare to prevent any default by protecting our priorities."

So just what does Webster think should be paid with the actual dollars Uncle Sam will have on hand if there's no debt ceiling deal?

First, the U.S. should prevent default by making the country's debt payments.

Then we should continue to pay military salaries and benefits in "such amounts as the President certifies to the Congress are necessary to carry out vital national security priorities."

Finally, Webster would spend what we have left on providing Social Security and Medicare benefits.

Some cash left over: Actually, says Webster, after meeting these suggested obligations, the Treasury should have around $30 billion left over each month.

The decision on what else would be paid, he said, would remain with the executive branch.

Webster emphasizes that his proposal is purely a stopgap spending plan if worse comes to worst in a few weeks.

"This bill is intended to be a short-term measure to require the Treasury to pay the specified accounts until a debt reduction plan can be initiated," he said in a fact sheet released in connection with the bill's introduction.

"The purpose in prioritizing public debt repayment is to keep the United States from entering a period of default on its existing loans," said Webster.

As for the military and senior citizens, Webster said "it is irresponsible to allow a situation to develop where our military and seniors, two groups of citizens that rely on Washington to fulfill its promises, may be forced to go without the programs that provide for their basic needs."

The bill is pending in the Ways and Means Committee. Cosponsors, all Republicans, are Rep Richard Nugent, Bill Posey and Dennis Ross, all of Florida; Michael Turner of Ohio; and Joe Wilson of South Carolina.

Do you agree with the Representatives' choices on spending our potentially limited federal funds? What do you want from government? What would you pay for, first and last?

History of the debt ceiling: While we are all waiting for resolution of the current U.S. fiscal situation, it's perversely reassuring to realize that this isn't anything new.

Glenn Kessler, The Fact Checker for the Washington Post, explains the debt ceiling debate, providing some perspective, history and evaluation of recent rantings about what's happening or not happening.