It's a muted Independence Day here in Austin. 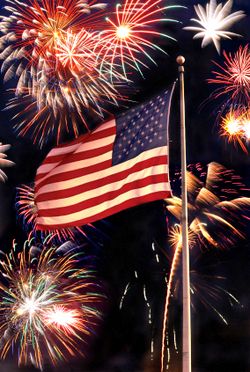 Our persistently hot, dry and windy weather has made this part of Central Texas a tinderbox, so the city has canceled its traditional July 4th fireworks display.

The state capital is not alone. Several neighboring towns and counties also have called off their fireworks shows.

Plus, many area jurisdictions have halted the sale of fireworks.

Folks aren't happy about the decisions to tone down today's displays, but we understand.

Nobody wants their home or their neighbors' properties destroyed by a wildfire started by sparks meant to celebrate America's national day.

Show and tax losses: But the Lone Star State's tax collector is just as sad as families who are making do this year without ceremonial rockets red glare.

Texas allows individuals to buy fireworks just three times a year, with the June 24 through July 4 period accounting for the bulk of the pyrotechnics sales.

Without these transactions, there will be no added revenue this summer from Texas' 2 percent sales tax on fireworks.

And regular sales tax collections also are likely to drop.

Fewer visitors to downtown Austin and other cities where July 4 shows have been canceled mean less money spent on taxable treats and T-shirts for the kids or dinners at local restaurants or drinks with friends afterwards.

Better tax and fireworks weather elsewhere: Luckily for Fourth of July celebrants and tax collectors in other parts of the country, the weather is more cooperative.

Prior fireworks bans have been lifted by counties, states and cities desperate to find any source of untapped revenue in these tough budgetary times.

The New York Times reports that concerns about safety have been trumped by the need for more cash and an "if you can't beat them, join them" mentality.

In many locales where fireworks are banned, residents can simply drive to the next town, or state, to buy firecrackers and bottle rockets and sparklers.

That fireworks workaround was part of the reason that the 65-year-old ban on fireworks in Hawkins County, Tenn., was lifted this year. "I'm tired of other counties sucking us dry," County Commissioner Shane Baily told the Times.

But the main reason for the change of heart? Fireworks sales in Hawkins County could generate as much as $200,000 in annual permit fees and sales tax revenue.

And that's an awfully big dollar amount for cash-strapped states to ignore.