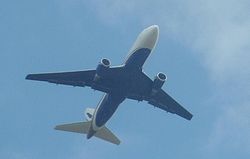 I've been at a tax conference at a Dallas hotel since Monday. During the last few days, I've watched lots of other folks check in.

I suspect many of them arrived in Big D the same way I did, via a flight.

I'm also pretty sure that some of my fellow travelers and I share something else. We bought our plane tickets when various aviation taxes were still in place, but didn't board an aircraft until after the taxes expired on July 23.

The taxes were part of a Federal Aviation Administration authorization measure that Congress couldn't agree on by the tax-ending deadline.

Our timing means that we're eligible for a refund of the ticket taxes we paid.

But how to get back that money, which for some passengers could be substantial, is a matter of contention.

Collector should pay: The IRS wants the airlines, which have been criticized by Congress and the public for increasing their fares by the lapsed tax amount and then pocketing the cash, to refund the tax to any of their passengers who ask.

That process makes sense, says the IRS, because the airlines already have information about their ticket tax paying passengers. That data, such as credit cards used to purchase the tickets, would make issuing refunds easier.

Of course, the IRS proposal is just a request. The airlines could just tell the tax agency to kiss off like they did passengers when they quietly hiked air fares under cover of the expired taxes.

Or if they wanted to actually provide a reason for not refunding the taxes, the airlines could argue that they have or soon will remit to the Treasury the taxes they collected, meaning it would then fall on the federal government to get any expired tax money in its possession back to consumers.

You do it. No, you do it: That was the stance taken Wednesday by the Air Transport Association, the group that represents major U.S. airlines.

"We agree that passengers are entitled to a refund based on precedent and case law from previous tax lapses," said ATA spokesman Steve Lott told Bloomberg News. "But we are puzzled by the IRS guidance on how to most efficiently get the refund. We believe it's the IRS' responsibility because ultimately it's the Treasury that has the tax money, not the airlines."

That "not my job, man" position is reflected by some of the major airlines.

American, United, Continental, Southwest and Virgin America are directing customer refund inquiries to the IRS. JetBlue, however, has from the beginning of this tax debacle told its customers to email refund requests to the airline.

Slower refunds if from the feds: The IRS says that if airlines balk at refunding the money, it will take care of it.

Of course, that means fliers will have to wait a while to get back their tax payments. The IRS explains why on its aviation taxes Web page:

Because the IRS has no information about passenger ticket purchases or travel dates, travelers who are unable to obtain a refund from the airline will be required to submit proof of taxes paid and travel dates to the IRS under procedures that are under development. The IRS will provide additional guidance at a later date.

So if you're like me, the payer of a tax that's now expired, give your airline a call or check its website.

And when -- sorry, if -- you don't get any satisfaction from the airline, stay tuned for word on how to collect your airline ticket tax refund from the IRS.

Meanwhile, for each day that Congress delays action on the FAA legislation, that agency is losing around $30 million a day in uncollected ticket taxes.