Gang of Six deficit details...sort of

The Gang of Six has released details on its budget proposal.

OK, details is a little strong. Really it's a five-page talking points memo that will rely on a two-pronged attack. 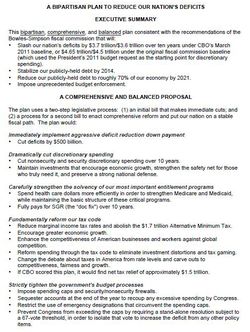 First, right up top, the proposal entitled (in all caps) "AN AGGRESSIVE PLAN THAT INVOLVES THE WHOLE CONGRESS" calls for a $500 billion "down payment" on the the federal deficit.

That money would come in part by imposing statutory discretionary spending caps through 2015 and implementing numerous budget process reforms. That's nice and vague.

Then we have part two, which calls for an additional $3.2 trillion in deficit reduction.

Just how we would achieve that added amount reverts to the usual Congressional process; that is, convoluted over many years.

And oh yeah, spreading the responsibly and potential blame over a lot of Congressional committees.

Who thinks that's a good idea? A show hands, please. Bueller? Anyone?

The "committees of jurisdiction" would be required within six months of the plan's enactment to report legislation that would "deliver real deficit savings in entitlement programs over 10 years" as follows:

Since this is a product of six Senators -- Kent Conrad (D-N.D.), Mark Warner (D-Va.), Dick Durbin (D-Ill.), Mike Crapo (R-Idaho), Saxby Chambliss (R-Ga.) and prodigal budgeteer Tom Coburn (R-Okla.) -- all the committees are on that side of Capitol Hill. But you can be sure that the House will stick its fingers in the budget pie, too, if this plan is accepted.

A few specifics: A couple of quasi-details did catch my eye.

First, the controversial chained consumer price index (CPI) method for providing cost of living adjustments to government benefits is part of the deal. Mot senior citizen lobbying groups have vehemently opposed switching to the chained CPI, so the Gang is proposing to exempt Supplemental Security Income from the shift for five years and then phase it in and provide a minimum benefit equal to 125 percent of the poverty line for five years.

Second, the proposal gets specific about tax rates.

Part of the Senate Finance Committee's task would be to reduce individual income tax rates from six to three tax brackets. The lawmakers are given three ranges: 8–12 percent, 14–22 percent and 23–29 percent. The top marginal income tax rate, at least through 2012, is 35 percent.

Lawmakers also would have to figure out how to pay for repeal of the pesky but profitable (for Uncle Sam) Alternative Minimum Tax, or AMT.

As for the corporate tax rate, Finance Committee members are charged with setting a rate between 23 percent and 29 percent.

Plus, any business tax reform proposal would end taxation of oversees profits; that is, switching from a worldwide tax system (collecting on money regardless of where it's made) to a territorial tax system (taxing only on income a business earns within a country's borders).

Plans are for the Gang to strong arm convince at last 60 of their Senate colleagues to support the deal within the next few days so that Congress can move forward with extending the federal debt ceiling.

I see no AMT, lower marginal rates, and agreement to look for reductions.
If this is part of tax simplification, bring it on. I'd propose that any time congress wants to add a line to the code, they must remove two. Phasing down the mortgage deduction to $500K of debt is a good idea. Thought I saw that in the plan as well.