Home Table of Contents Tax Tips Credits Deductions Refunds State Taxes Politics/Laws Tax Terms Archives
Tracking down your tax refund
Hit with a tax lien? Talk with the IRS about it in person on Saturday, July 16

When debt is mentioned, most of us right now think of how deep a hole the United States is in, thanks to the continuing coverage (this blog included) of the the country's deficit and the debt ceiling debate.

But individuals and businesses also carry a lot of debt.

And this week, in a rare joint hearing, Congress' two tax-writing committees took a look at whether the tax code is a major enabler of major debt.

OK, it's a bit more complicated that my flip dismissal indicates, but even a cursory look at our tax systems shows that it rewards borrowing more than saving.

The House Ways and Means Committee and its counterpart the Senate Finance Committee looked at both business and household debt at the hearing on Wednesday, July 13. It was the latest in a series of Congressional hearings on how to revamp our tax system.

The table below offers a glimpse of the enormity of the three debt situations we face: 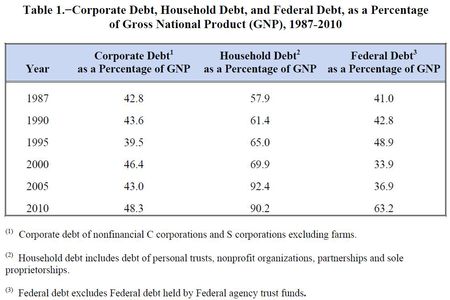 Personal debt balloons: As the numbers make painfully clear, household debt as a portion of the U.S. gross national product is substantially larger than what's owed by either businesses or Uncle Sam.

Because of that, and since I tend to focus on individual taxes, I'm going to stick with household debt and taxes in this post.

Joint Committee on Taxation data show that outstanding household debt at the end of 2010 was $13.386 trillion.

Of this amount, by far the largest category was home mortgage debt. That came to $10.055 trillion.

Breaking the debt down further, we find:

The Joint Committee put some of what households owe in a pie chart. While that display is much prettier, it doesn't make the depth of our debt any more palatable. 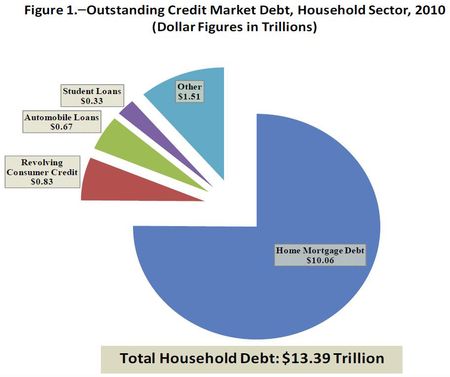 Deducting debt: I've been paying taxes long enough to remember when we could deduct the interest on personal debts, such as credit card accounts and auto loans. The deduction was eliminated in the Tax Reform Act of 1986.

But we still have plenty of other tax inducements to go into debt.

There's that gigantic chunk of home mortgage debt interest we can write off, not only on our primary residence, but also on a second home. And don't forget home equity loan interest deductions and prepaid interest in the form of loan points.

And you can even deduct interest on a loan taken out for investment puposes.

Doing away with debt bias: Such tax breaks are part of what Simon Johnson, a professor of entrepreneurship at the MIT Sloan School of Management, told the Representatives and Senators was the U.S. Tax Code's "debt bias."

But even after taking away some tax reward for going into debt, Johnson said our tax system still encourages borrowing by households, the nonfinancial sector and financial firms:

"Primarily because interest payments can be deducted as an expense when calculating taxes, homeowners borrow more relative to house prices, and firms finance themselves relatively more with debt and relatively less with equity.

This is true for firms and banks; it is also true for households — as many American families unfortunately discovered when house prices fell."

You can read all of Johnson's testimony, as well as the remarks of other experts at your leisure.

As for your personal debt load, both tax-advantaged and not, I'll leave that to your discretion.

I'm still learning from you, but I'm trying to achieve my goals. I certainly liked reading everything that is written on your blog.Keep the posts coming. I liked it!