For tax geeks, today is one of those "where were you?" days.

On June 7, 2001, then-President W's first round of tax cuts became official. The Economic Growth and Tax Relief Reconciliation Act (EGTRRA) of 2001 was enacted.

"Tax cuts turn 10" is the topic of my Bankrate Taxes Blog today. Normally, I'd wait until Saturday to mention it as part of my weekend "at my other blog" feature.

But the 10th anniversary of such major tax-law change is a pretty big deal, for tax geeks and normal folks alike. So I'm mentioning it now here at the ol' blog, too.

Notably everybody got a bit of a tax break, thanks to the creation of the new 10 percent tax bracket and the trimming of most of the existing 2001 income tax rates. The tax value of children increased. Many married folks who file jointly saw their tax bills drop a bit. And in 2010, heirs to some really wealthy people made out like tax bandits.

Then we have the flip side.

Although the tax cuts were sold a decade ago as critical parts of an economic stimulus, they didn't pan out as much as advertised. Job growth was less than under the previous administration.

The richest one percent of Americans captured 65 percent of the income gains between 2002 and 2007, while by the end of the 2000s' economic expansion, the typical household's income was less than what it had been when the decade started.

And then there's the federal deficit. The fiscal hole Uncle Sam has been digging deeper into each year. The tax cuts of 2001 and additional tax tweask in 2003 are a big reason for all the red U.S. ink. 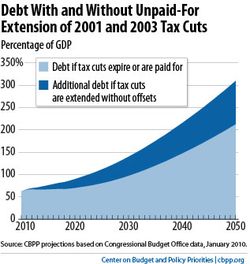 Deficits did matter back then. Politicians, most famously Bush Veep Dick Cheney, just ignored them. So did the tax-cut crazy electorate.

Deficits still matter, more so now. And we can't let politicians off the hook yet again.

This time we taxpayers have to make sure that Washington knows we want an equitable fiscal solution. That means budget cuts and tax increases.

We've tried it the tax cuts way for 10 years, with two years left to go because weak-willed lawmakers blinked in December 2010. We can't afford to continue on such a one-sided financial path any longer.

I note you omit revenue numbers, no doubt because you know that revenue significantly increased after the tax cuts, and the increase was substantially more than predicted.

Deficits are caused by excessive spending, not under taxation.

You don't mention that these days only about half of 'taxpayers' pay any income tax, and around a fourth of 'taxpayers' enjoy a negative tax rate (destroying your 'tax cuts for the rich argument right there).

Lafer is correct, you are mistaken.