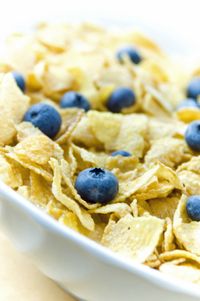 As I sat down to my bowl of corn flakes this morning, I couldn't help but wonder about the future price of a box of cereal.

My breakfast food cost musings were prompted not only by my plans later today to do our weekly grocery shopping, but also by the Senate's surprisingly bipartisan vote yesterday to end tax credits for ethanol and trade protection that benefits the corn-based industry.

Critics of government agriculture subsidies have long argued that part of the reason we're paying more at the store is because food crops are being supplanted by fields designated for fuel.

It's a concern not just in the United States, but globally.

Last week, a half dozen international groups called for the end of government subsidies for biofuels in order to help ease pressure on global food prices.

"As long as governments impose mandates (obligations to blend fixed proportions of biofuels with fossil fuels, or binding targets for shares of biofuels in energy use), biofuel production will aggravate the price inelasticity of demand that contributes to volatility in agricultural prices," according to Price Volatility in Food and Agricultural Markets: Policy Responses, a report produced at the request of G-20 leaders and issued last week.

Subsidy history, costs: The United States currently pays around $20 billion per year to farmers in direct subsidies. The programs, born in the wake of the Great Depression's economic turmoil, give farmers extra money for their crops and guarantee a price floor.

Now, however, the programs are driving crop selection rather than just supporting struggling farmers.

And in many cases, the farming sector for which the laws were originally designed is no longer getting most of the benefits.

Research from the Heritage Foundation in 2001 showed that nearly three quarters of subsidy money that year went to the top 10 percent of recipients. In fact, the subsidy money is seen as a contributor to the loss of family farms, with many struggling operations selling their fields to agribusiness giants who are the real beneficiaries of government price supports.

A vote that doesn't matter: So yesterday's Senate vote to end the $6 billion a year ethanol subsidy was a victory, not only for those who want a change in tax policy, but also for consumers and American taxpayers.

This latest vote to end the ethanol tax credit -- an effort led by Sen. Tom Coburn (R-Okla.) was rejected on a procedural vote the day before -- was merely symbolic. The end to ethanol government funds was an amendment to the Economic Development Revitalization Act of 2011, a bill that is is likely to ultimately fail.

That means that once again, Senators got to take a stand with no worry about having to really answer for their position since the anti-ethanol measure, in this current legislative form, won't ever take effect.

However, that so many Senators, especially Republican lawmakers, finally went on record opposing the ethanol subsidy does seem to indicate that this particular tax tide might be turning somewhat.

Should big oil be worried about its tax breaks? Probably not … yet.

But in the larger fiscal debate scenario, the ethanol vote indicates that the previously unassailable "no tax increases and no new taxes of any type ever" orthodoxy of the GOP can be challenged.

And that's very good news as Capitol Hill continues to work on ways to deal with the federal deficit and fiscal year budget.

Of course, what you didn't mention was that the cost of transportation and marketing have a bigger impact on your breakfast cereal than the price of raw commodities. Why not a blog post about oil subsidies remaining in place? Well to be honest, since the oil companies received the tax credit for blending ethanol they were cut....as i read your post you are okay with oil companies receiving more and more of our tax dollars.. Btw, even if corn prices decrease your cereal prices won't...they gotcha.

"I couldn't help but wonder about the future price of a box of cereal."

Field corn's at about $7 per bushel, or 12.5 cents for one pound. That isn't what's making your corn flakes expensive.

Anyone who wants to solve hunger problems should check their garbage can first: "Fully one-third of all food produced globally — a staggering 1.3 billion tons — is lost or wasted every year, a new study released on Wednesday by the United Nations’ Food and Agriculture Organization finds." http://green.blogs.nytimes.com/2011/05/13/one-third-of-worlds-food-wasted-report-says/