Obama has been making a concerted effort to shore up Hispanic support. At his commencement address last week to the 2011 class of Miami Dade College, the prez pledged his support for immigration reform and the DREAM Act.

The DREAM Act -- the acronym stands for Development, Relief and Education for Alien Minors -- would offer legal standing to immigrants who illegally entered the United States as children but who meet certain criteria.

The requirements include living in the U.S. for more than five years, graduating from high school and demonstrating "good moral character." They also would have to then enroll in college or the military.

"It makes no sense to expel talented young people from our country," Obama said. "If they are trying to serve in our military or earn a degree, they are contributing to our future, and we welcome those contributions."

Stalled DREAM: Last year, the House approved the DREAM Act during its lame duck session. The Senate, however, narrowly defeated the bill.

The bill now must restart the legislative process in the 112th Congress. And results from the mid-term election make Congressional approval a bit tougher this time.

Undocumented taxes: One of the oft-cited arguments against undocumented residents is that that they use services paid for by tax dollars from legal residents.

Surprise! Folks who are in the United States without Immigration and Customs Service approval also pay taxes that benefit us all, regardless of whether we were born here or formally immigrated.

The Immigration Policy Center, using data collected by the Institute for Taxation and Economic Policy, estimates that in 2010 households headed by unauthorized immigrants paid $11.2 billion in state and local taxes. The tax breakout is:

The Immigration Policy Center report details just how much undocumented workers pay the various state tax departments. The bar graph and table below show the figures for the top 10 states receiving illegal immigrant tax payments. (If the images don't show up in your feed reader, you can find them in the report.) 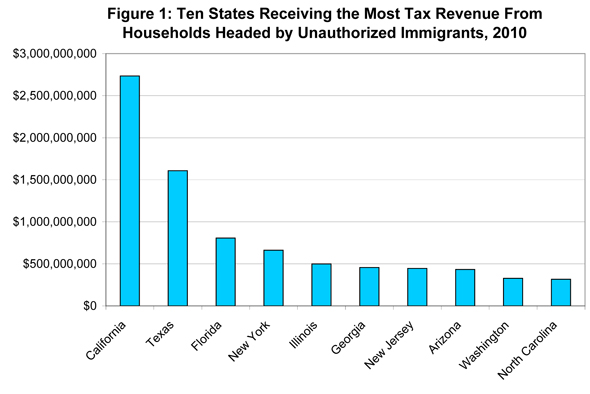 And here's the more specific look at where the undocumented workers' tax dollars go in those top 10 states:

* No state income tax
Click image for a larger view.

Admittedly, it's hard to come up with precise numbers when individuals are afraid of being deported.

But the estimates are large enough to dispel the trope that all undocumented residents are sponging off the rest of the country's workers.

Federal taxes, too: And where undocumented workers are paying state taxes, they likely are paying federal income taxes.

As the IRS often points out, its job is not to verify immigration status but to collect taxes, so it makes it possible for such taxpayers to get Individual Tax Identification Numbers, or ITINs, to file their returns.

Federal income tax payments also mean the associated Social Security and Medicare taxes, either via payroll withholding or at tax filing time via self-employment taxes. The Social Security Administration has estimated that about three-quarters of illegal workers pay these taxes.

The bottom line is that undocumented taxpayers do contribute financially to the fiscal health of governments.

So if you have reasons for supporting tougher immigration laws or not supporting the DREAM Act, fine. But just don't rely on the tax cost one.

Donald, yes some people who are here illegally do pay their taxes. I know CPAs and other tax preparers, here in Texas and across the U.S., who work with this clientele, and I have talked with IRS reps about this phenomenon. Folks who are here without documentation entered the country that way in many cases because they cannot get in as quickly via legal channels. But once they are here and have established lives, albeit illegally, they still pay their taxes and be contributing members of the United States. That's why many jurisdictions (including law enforcement) oppose ad hoc immigration status checks; they fear it would stifle such subsequent legal intentions. Undocumented residents also hope that by complying with U.S. laws, including tax laws, once they're here, that will be taken into consideration (as has been proposed in prior immigration laws) in determining how much sooner they might be able to get their legal, proper residency status.

Wow; estimated $1.2 billion in personal income taxes - Does that come out to a couple bucks per person? Anywhere near what is spent on border patrol, limited enforcement efforts, criminal costs, health, education, SS and welfare for all illegal immigrants?
And if the IRS admits that most illegal immigrants do not have SS numbers and that they certainly do not investigate these individuals, how are illegal immigrants filing and paying federal and state income taxes? Are you really asking people to believe that individuals who break the immigration laws are conscientious about tax laws?