If you're one of the almost 35 million Americans expected to hit the highway this Memorial Day holiday, make sure you have enough gas money.

Gasoline prices aren't going to hit the $5 dollar a gallon mark (thank goodness!) that some predicted back in April when there was so much Mideast turmoil.

But most of us are still shelling out close to $4 per gallon at our local filling stations. Still, according to AAA's annual Memorial Day travel survey, six out of 10 Americans say that higher gas prices won't affect their getaway plans.

The single biggest factor in the price of gasoline is the cost of crude oil. The graphic there to the left (courtesy of the U.S. Energy Information Administration; click on it for a larger view) is from 2010, so the lovely low dollar amounts for a gallon of gas don't apply now. But it still illustrates the pricing breakdown.

Taxes also play a part in the price of gasoline. The federal fuel excise tax on gasoline is 18.4 cents per gallon. Then all 50 states and the District of Columbia add their own excise tax. And most states tack on other fuel-related charges, such as license fees or environmental levies for things such as fuel storage tanks, that also add to the per-gallon price we drivers pay.

The America Petroleum Institute (API) tracks all these charges and releases quarterly reports on the country's fuel excise taxes. API follows both diesel and gasoline, but since most of us own gasoline-powered autos, that's what I'm focusing on today.

Highest gas taxes in the U.S.: Over at Bankrate.com, I helped put together a slide show of the 10 states with the highest gas taxes right now. But for you text folks, below is a list of the top 15, with the combined gas tax rate listed first and the state-only gas excise tax in parentheses:

You might have noticed that Florida's state excise tax actually is tiny, only 4 cents per gallon. But the Sunshine State collects a lot of other fees and taxes -- 30.4 cents per gallon to be precise. These costs include, according to API, sales taxes at both the state and county levels, as well as a state transportation system tax and various state environmental import taxes.

Lowest gas taxes in the nation: So where do drivers have it best when it comes to gas taxes? Alaska.

Below is a list of the five states that currently have the lowest combined gas tax rates, again with the precise state excise tax in parentheses:

The map below, also from API, shows all the state gas tax rates as of May. 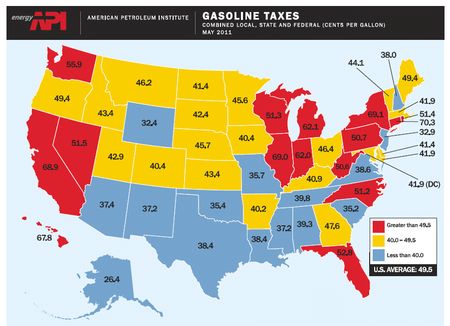 Topping off your data tank: If you want even more gas data, check out the Natural Resources Defense Council's latest report on which U.S. drivers in 2010 spent the largest percentage of their income on gasoline. Not to spoil the ending, but Mississippi tops that list, just as it did in 2009, 2008, 2007 and 2006.

Regardless of how much of our pay goes to fuel, we all want the best bargain. Gas Buddy and Mapquest can help you out on your fuel-saving quest, whether you're commuting, running errands or on vacation this long holiday weekend or later in the summer.

This post is impressive. It tells us about the ups and downs of taxes and prices. They are sometimes high and sometimes low. Thanks for sharing this post.

I absolutely adore reading your blog posts, the variety of writing is smashing.This blog as usual was educational, I have had to bookmark your site and subscribe to your feed in ifeed. Your theme looks lovely.Thanks for sharing.
Regards
Stock Tips