Thank you, my fellow taxpayers, for fulfilling your tax duties and giving Congress more time to screw around.

As we all are very well aware, the country's debt limit needs to be increased soon so that Uncle Sam can pay his bills.

But that drop-dead date has been extended for about a month thanks to a greater-than-expected increase in tax revenue.

The official debt ceiling deadline is May 16, so the Treasury is now taking emergency steps to buy additional time under the cap. But the real day when federal checks will bounce has been pushed from July to August. 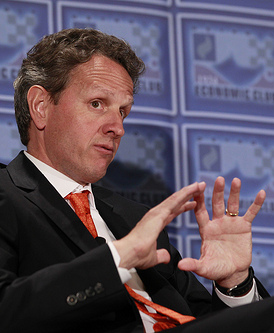 U.S. Treasury Secretary Timothy Geithner (left) let Congress know about the fiscal breathing room in a letter he sent yesterday to House and Senate leaders of both parties.

These include the suspension of various Treasury securities that could affect government-funded projects and investments. The suspensions should get the federal government into July without running out of cash.

But Geithner also noted that Treasury had discovered a nice surprise, telling Congress:

"Largely as a result of stronger than expected tax receipts, we now estimate that these extraordinary measures would allow the Treasury to extend borrowing authority until about August 2, 2011, approximately three weeks later than was forecast last month."

Of course, notes Geithner in his best bet-hedging assessment, the August date is just a projection and is "subject to change based on government receipts and other factors during the next three months."

So, the Secretary urges in his letter:

"While this updated estimate in theory gives Congress additional time to complete work on increasing the debt limit, I caution strongly against delaying action.  The economy is still in the early stages of recovery, and financial markets here and around the world are watching the United States closely.  Delaying action risks a loss of confidence and accompanying negative economic effects."

On one hand, I'm glad Uncle Sam essentially found some coins under his couch cushions.

But I hate that it will give Congress more time to fight about the debt ceiling because we all know, despite Geithner's plea, that Representatives and Senators will go down to the very last minute before doing what has to be done.

Debt ceiling details: In addition to the May 2, 2011, letter to Congress, Treasury also released a Q&A sheet about the state and local bonds that it plans to suspend this week if the federal debt limit isn't increased.

Treasury also has put together a Debt Limit: Myth vs. Fact information sheet.

And the Department notes that since 1960, Congress has acted 78 separate times to permanently raise, temporarily extend or revise the definition of the debt limit. Forty-nine such debt ceiling moves came under Republican presidents and 29 were while a Democrat was in the Oval Office.

Its gonna happen sooner or later