I try to cover a lot of stuff here on the ol' blog. Sometimes, though, it's hard to keep track of what happens after a post.

So I'm today instituting Follow-up Friday, a new feature that I plan to post at the end of the work week when there's something that needs further attention. In it, I'll update previous posts -- some that were recent, others from a while back -- just to close the loop on the issues. 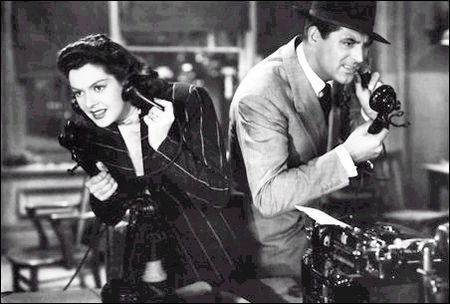 Newspaper reporter Hildy Johnson (Rosalind Russell) and her editor Walter Burns (Cary Grant) race to get the news out in "His Girl Friday" (Columbia Pictures, 1940).

First, Arnold Schwarzenegger. No, no more on his tawdry personal life. This is professional; specifically how the Governator's return to acting is now on hold. Earlier I blogged about an interesting film project, Cry Macho, that he was ready to start filming. No longer. But I'm sure -- wait for it -- Arnold will be back.

Then there's the prospect of Washington, D.C., taxing municipal bond interest. That's been proposed as a way to help the nation's capital close its budget gap. The other option was a new, higher tax rate on residents making $200,000 or more. City legislators have opted for the bond interest tax. For now. Stay tuned.

Finally, this spring has been full of stories that include the words "most deadly" and "destroyed" and "left in ruins." Not surprisingly, the IRS is giving taxpayers in Joplin, Mo., and other areas that were storm targets some extra tax consideration.

Meanwhile, the possibility of more tornadoes exists throughout the holiday weekend. If you can spare some cash, all of the relief organizations are ready to take it.

And your contributions also will help the charitable groups rebuild their coffers in advance of the upcoming hurricane season.

That's it for today. Have a safe Memorial Day holiday.