I hear from a lot of folks wanting to know how they can turn in someone they're convinced is cheating on their taxes.

Some of these people are looking for a possible reward for ratting out a tax cheat. That system has improved over the years, but it still takes a while and requires the actual collection of substantial unpaid taxes before the IRS Whistleblower Office says thanks to tax tattletales with cash.

Others are just irked that someone is getting away with not paying their fair tax share and simply want to ensure that the scofflaws are caught. I'm sure they wouldn't turn down any reward, but that's not their prime motivation.

I typically refer those with tax cheating tales to tell them to the IRS by filing Form 3949A, Information Referral, and Form 211, Application for Award for Original Information, if they hope to get a reward for their informaiton.

On the potential reward reporting document, however, the IRS notes that, "We may disclose this information as authorized by 26 USC 6103, including to the subject taxpayer(s) as needed in a tax compliance investigation and to the Department of Justice for civil and criminal litigation."

And that disclosure proviso scares off some folks.

They might want to instead check out Tax Squeal. This website, created by retired IRS agent Al Drucker of Manalapan, N.J., promises:

NO government paperwork or questioning!
NO record of your identity!
NO direct contact with taxing authorities!
NO fees or postage charges!
We Squeal For You! 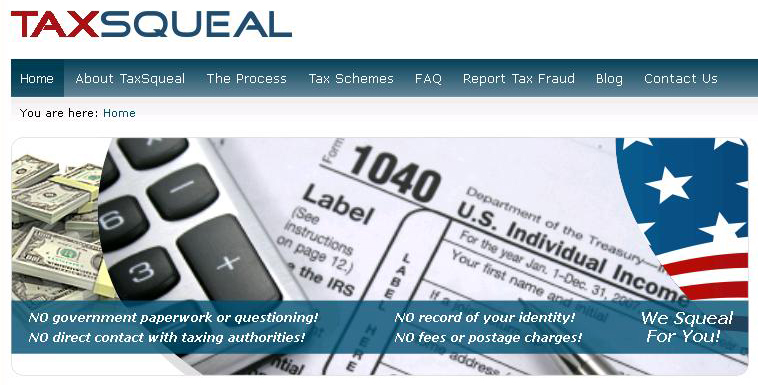 The advantage of Tax Squeal? You can report suspected tax cheating and fraud anonymously.

The disadvantage of Tax Squeal, aside from not being eligible for any possible reward? A hidden accuser system could encourage some people to turn in others for reasons other than concern about the fairness and sanctity of the U.S. tax system.

Perhaps they have an ax to grind with a neighbor, coworker or ex-spouse, all apparently top users of Tax Squeal. They can just anonymously sic the Internal Revenue Service on their targets and then stand back and watch the falsely accused tax cheats squirm or worse.

The potential for such abuse for purely personal reasons has prompted criticism of the anonymous reporting system. One blogging tax attorney took Drucker and his website to task, prompting the Tax Squeal owner to respond:

"First of all, the allegations are NOT posted on this siete (sic) for the public at large to read. Secondly, this is the ONLY anonymous, FREE, on-line site to report tax fraud allegations that is not affiliated with a government agency or department. There are genuine allegations that would never be reported with sites like taxsqueal.com. There is no way to prevent disgruntled individuals from causing havoc for anyone if they so desire. In my opinion, the good outweighs the bad. Remember, without sufficient corroboration or evidence, further evaluation prior to an investigation may be impossible. Therefore, the squeal dies on the vine."

Since the allegations aren't posted online, I don't have an issue with Tax Squeal or any other non-IRS operation serving as a funnel for tax fraud reports. It looks to be the IRS system but without inclusion of the reporting person's identity.

And the filing of Form 211 directly with the IRS doesn't prevent false reports of tax cheating for purely vindictive purposes by the form filer.

Yes, knowing that their identity has no chance of being revealed likely will prompt more false reports by disgruntled ex-employees or family and fiends who feel wronged. But I suspect that if these folks who file false tax cheating reports are intent on making life hell for the people they target, I suspect they'll find plenty of other ways to do just that.

Would you prefer to tell the IRS directly about a suspected case of tax fraud? Or would you opt to forgo any potential reward money and report alleged tax cheating anonymously?