The IRS is not a loan operation

That headline doesn't refer to the millions of folks who get refunds each year, essentially providing Uncle Sam with a no-interest loan of their money, which, by the way, he thanks you for in this era of deficit spending. 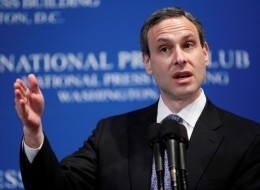 The statement is from Internal Revenue Service Commissioner Doug Shulman in response to a question, following his speech before the National Press Club this week, about delayed processing of returns that paid back this year all or some of the 2008 first-time homebuyer "credit."

As everyone is painfully aware of by now, that real estate industry sop credit three years ago wasn't actually a credit. It was a $7,500 interest-free loan, this time from Uncle Sam to certain folks buying qualifying homes.

Now those homeowners are beginning to make their first credit/loan payments. The results have not been pretty, with some folks waiting months for refunds.

Anyone who paid attention to this legislative legerdemain knew it was going to cause problems for taxpayers. But we didn't realize what a loop it would throw the IRS.

To be fair, the agency already was dealing with 2011 filing season computer issues as it updated its systems to account for tax law changes made late in 2010.

The main problem, though, is that the original "credit" and its administration is simply something the IRS is not designed to do. But then Congress, like a lot of bosses, tends to think it can make all sorts of promises to customers PACs voters and then ask tell workers, this time the IRS, to do anything and everything regardless of whether they're equipped (or funded) to do so.

The IRS commissioner, though, has a request of Capitol Hill. Please don't do that again.

"Twenty-seven billion in tax credits has been paid out in connection with this legislation, and I'm proud of IRS efforts here," said Shulman in response to the post-speech query about the homebuyer credit complications and delayed refunds for some filers.

"But the creative $7,500 'credit' produced unique challenges for the IRS," continued the commish. "We are not a loan operation. I encourage Congress not to do this in the future."

Directive for Congress: I've heard Shulman speak many times since he took over the IRS' top job three years ago. He's articulate, thoughtful, enthusiastic about his agency's possibilities and measured in his assessments of its challenges.

But when Shulman mentioned the original homebuyer credit, I heard for the first time a bit of irritation in his voice.

As much as the IRS gets slammed, and sometimes the criticism is warranted, Shulman is dead on regarding the problems in this circumstance.

Any time there's a new tax law, there are kinks. The IRS doesn't get the luxury of full scale Beta testing. And when you consider all the millions of taxpayers who have almost that many individual filing situations, there are breakdowns.

Congress usually doesn't think about the implementation of its actions. Again, that top boss attitude. But since it makes the tax laws, it needs to talk more with the IRS which administers them before they affect you and me.

Basically, lawmakers should pay more attention to just how their usually politically motivated tax policies will likely play out in real life. Or, as the commish suggested, don't do that again.

Shulman wasn't trying to shift the blame. He acknowledged that his office hadn't done the type of job with this particular first-time homebuyer credit issue that he would like. But, he said, the problems have been fixed and refunds will be going out soon.

That is, of course, unless those folks on Capitol Hill end up shutting down the government for a while, another politically motivated action that will adversely affect millions of Americans.