IRS data show that most taxpayers get refunds. Yes, even some filers who procrastinate will eventually get money back from the Internal Revenue Service.

So what to do with that extra cash?

The oldie-but-goodie tax refund pie chart from Punny Money (hat tip to National Association of Tax Professionals) provides a humorous look at the annual divergence of what people say they'll do with their tax refunds and how they actually spend their refund money. 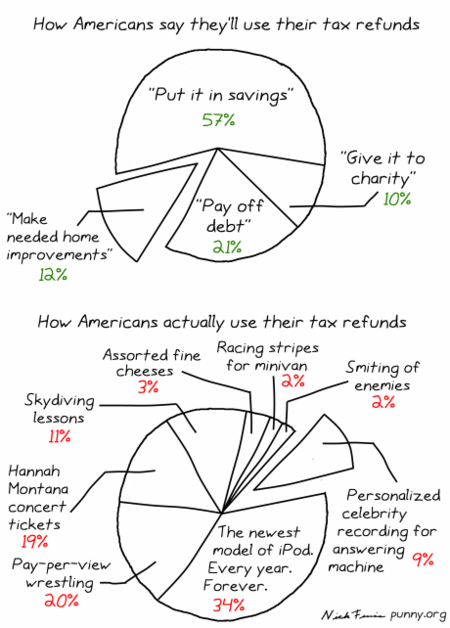 Controlling your tax refund: Getting a tax refund is, in large part, your choice.

While the IRS is the bad guy for collecting taxes each April and throughout the year via payroll withholding, the tax agency doesn't take excess money or overcharge you. You do it to yourself by not giving your employer the most accurate withholding information.

Conventional wisdom says the tax goal is to have your withholding be as close to your actual eventual tax bill as possible.

Bu as IRS statistics indicate year after year, that's not the typical taxpayer case. Most folks have their workplaces overwithhold their income taxes. That's easy to remedy.

Instead of letting Uncle Sam have year-long, interest-free use of your money, payroll adjustments can help you can get the extra dollars as added income each pay period.

Of course, some folks just aren't good money managers. If they get a bit more each payday, they spend it. So they view overwithholding as a forced savings account.

Then there's the other option. Coming up short when you figure your final annual tax liability.

That's what I prefer. I like owing the IRS a tiny bit each year. That way the Treasury has to wait on my payment each April rather than me waiting for a refund check that might be delayed.

Some taxpayers due IRS refunds had to wait until February this filing season for their money because of late changes to the tax laws and the subsequent IRS computer upgrade catch-up.

And some filers paying back the 2008 first-time homebuyer credit recently experienced delays in their returns' processing. That meant some of them are still waiting for refunds.

One proviso on underwithholding: If you short the IRS too much, you could end up owing extra because of penalties and interest.

Our tax system operates on a pay-as-you-earn basis and the tax collector has the authority to whack filers who try to essentially pay their full annual tax debts in one lump sum each April.

But a little bit of owing is OK, both with the IRS and for your financial bottom line.

Again, I'm an advocate of owing a little at the state level each tax year. I suspect taxpayers in California, North Carolina, New York and Hawaii might share my sentiment.

Those were just a few of the states that, because of budget issues, recently delayed delivery of state refund checks.

Residents in refund-delaying states discovered that waiting for a refund from state officials is just as frustrating as waiting for a federal refund.

When to file a new W-4: You definitely should reexamine your withholding when you have a major life change, such as getting married, buying a home of having a child.

Each of those situations could affect your ultimate tax bill. So run the withholding numbers in these cases -- the IRS has an online calculator to help you come up with the most accurate figures -- and turn in a new W-4.

But how much federal (and state) tax you have withheld from your pay is your personal tax and financial choice. Make it wisely.

If you do want to adjust your payroll tax withholding either direction, it's easy.

Want to tell your friends about this blog post? Check out the buttons -- Tweet This, Reblog, Like, Digg This and more -- at the bottom of this post. Or you can use the Share Thisicon to spread the word via e-mail and online avenues. Thanks!

Getting over that tax refund expectation is the key. You're absolutely right, why give the government an interest free loan. Fill out those W-4s correctly.