You might still be working on your 2010 tax return, but your earnings so far this year have been going to pay your 2011 tax bill.

So put down your Form 1040 instruction book and take a minute to celebrate. Today is America's Tax Freedom Day.

That means, according to the Tax Foundation, that U.S. taxpayers on average will have earned enough by today to pay off their 2011 federal, state and local taxes.

The Washington, D.C.-based nonpartisan research and policy group has been tracking Tax Freedom Day for 40 years.

The 2011 "celebration" also is nearly two weeks earlier than in 2007. The Tax Foundation says this shift toward a lower tax burden since 2007 has been driven by three factors:

But even with today's tax reductions, the Tax Foundation says Americans will pay more in taxes in 2011 than they will spend on groceries, clothing and shelter combined. 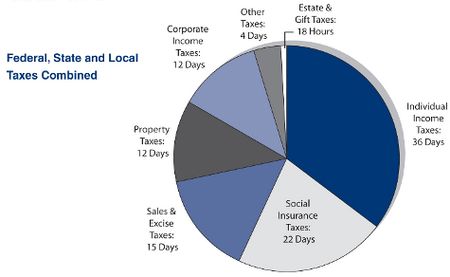 Sales and excise taxes, mostly state and local, take 15 days to pay off.

Property taxes take another 12 days of work for taxpayers to cover that assessment.

Americans will log four more days to pay other miscellaneous taxes, most notably including motor vehicle license taxes and severance taxes, and about 18 hours for estate and gift taxes. 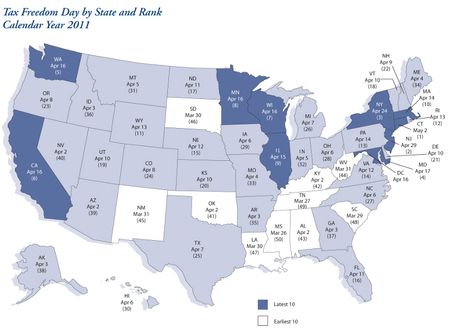 The various days at which states and the District of Columbia reach their Tax Freedom Day happens not simply because of different amounts of state and local taxes, but also because states' federal tax payments can vary dramatically.

Because of lower incomes and low state and local tax burdens, Mississippi was the first to celebrate its Tax Freedom Day. That party was held on March 26, only 85 days into 2011.

Other early state Tax Freedom Days came in Tennessee on March 27, South Carolina on March 29, Louisiana and South Dakota on March 30 and New Mexico and West Virginia on March 31.

High-income states pay much more in federal taxes and they often also have higher state and local taxes. That means residents of those states have to wait longer for their Tax Freedom Day.

Connecticut is the last to observe Tax Freedom Day, waiting 122 days, or until May 2, for Nutmeg State taxpayers to earn enough to cover all their 2011 tax obligations.

Other belated Tax Freedom Day celebrations will be held in New Jersey on April 29, New York on April 24, Maryland on April 17 and Washington (both the state and the District of Columbia), California, Wisconsin and Minnesota on April 16.

The Tax Foundation provides the state Tax Freedom Days in an alphabetical list on page 7 of its full report (PDF).

Mark your calendars and get ready to party!