Have you ever cheated on your taxes? If you're an unmarried man younger than 45, chances are you have at one time stiffed Uncle Sam.

The latest DDB Life Style Study found that while only 15 percent of Americans admit that they are likely to cheat on their taxes, there are some traits specific to tax cheats.

The biggest difference between tax cheats and those who meticulously fill out their 1040s is gender.

Sorry, guys, more of you are guilty.

DDB pollsters found that 64 percent of tax cheats are men. They also are likely to be single and younger than age 45.

"One might assume that tax cheaters would have lower income levels than noncheaters and that cheating on their taxes is an attempt to hold onto every cent they have coming to them," said James Lou, U.S. Chief Strategist at DDB Worldwide Communications Group Inc. "We've found that there are no major differences in income between tax cheaters and noncheaters."

DDB did discover, however, significant differences in how potential tax cheats make their income last and how they view themselves.

Tax cheats also are more likely to spend their money than save it, with 45 percent describing themselves as "a spender rather than a saver" vs. 32 percent of noncheaters.

Inside a tax cheat's mind: So aside from trying to hang onto more of their money, just why do people cheat on their taxes?

Suspicion of taxes is deeply rooted in our national psyche, says Green, going back to our country's origin. Note the co-opting by today's Tea Party of the seminal American Revolution protest in 1773 Boston.

You can find out more about tax cheats and how the IRS is trying to catch them in the CNBC documentary The American Tax Cheat.

The cable channel program airs tonight at 9 p.m. Eastern (8 p.m. Central). You can get a preview of the show in this Motley Fool interview with CNBC's Becky Quick.

What catches an IRS auditor's eye? In addition to looking at your gender and filing status on your return as a clue as to whether you might be lying on your 1040, the IRS has other ways to catch tax cheats.

They can look at your deduction choice.

Most Americans claim the standard deduction rather than itemize, but those who do list their expenses on Schedule A have more chances to cheat.

And that means that one way for an IRS examiner (that's the term the agency prefers to auditor) to find potential tax cheats is to hone in on filers' itemized deductions.

More precisely, the IRS looks at taxpayer average deductions for their incomes.

This is done by utilizing the DIF, or Discrimination Information Function, which compares individual tax returns to a computer model and then gives the returns a score rating the probability of inaccurate tax filing information.

The IRS acknowledges that is has a DIF system, closely guards details on how it works.

But it is no secret that the federal tax collector focuses on filers whose itemized deductions vary greatly from the claims of most other taxpayers in the same income bracket.

So how do you stack up? Tax information publisher and software maker CCH each year uses the latest IRS complete filing data (that's 2008) to put together a table showing the average amount of popular deductions in various income ranges for that year's Schedule A's. 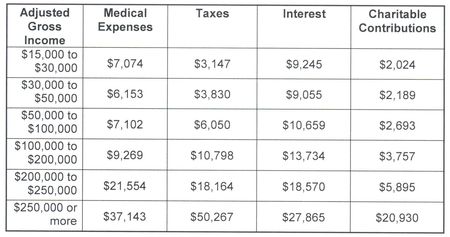 Keep in mind that the CCH figures are averages only and they're from three years ago. So don't try to fudge your Schedule A claims using these amounts.

But the information is useful in seeing whether your actual deductions might be a bit out of the ordinary.