The spring storm season is upon us with a vengeance. Last night, another round of tornadoes and severe storms lashed the Midwest and South. The one bit of good news is that there were no fatalities. 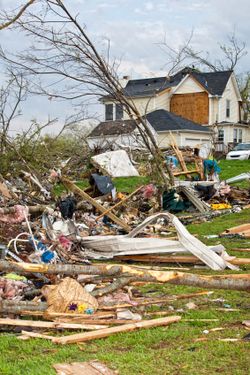 The severe weather outbreak a few days ago killed at least 47 people. North Carolina was the hardest hit, with homes and businesses flattened and 24 people losing their lives. This latest tragedy comes only about six months after the state took a hard hit last fall from strong storms and flooding.

The North Carolina Department of Revenue quickly announced special state tax relief for residents in the devastated areas. Tar Heel tax officials are waiving penalties on state taxes and returns that were due between April 18 and May 1.

Affected taxpayers need to file Form NC-5500 with their late tax payment or return. Be sure to check the block for "natural disaster" and fill in all the required information.

If you can't download form, North Carolina tax officials will accept a letter explaining why the payment or return is late. Also, if you don't send in the form and you're later assessed a penalty, you can complete the NC-5500 then to have the charge rebated.

It's not the agency's fault. The IRS had to wait for FEMA to assess the area and then for the president to declare portions of the state a major disaster area.

Once that word came from the Oval Office, the IRS announced that North Carolina taxpayers, both individuals living in those counties as well as businesses operating there, have until June 30 to send in their returns and pay any due tax.

This later deadline also applies to the 2010 tax year contributions to individual retirement accounts, both traditional IRAs and Roth plans.

In addition, failure-to-deposit penalties for employment and excise tax deposits that were due on or after April 16 also are waived as long as the deposits are made by May 2.

The IRS automatically identifies taxpayers located in disaster areas and applies the pertinent filing and payment relief. If, however, you do receive a penalty notice from the IRS, call the telephone number on the notice to have any interest and late-filing or late-payment penalties abated.

And if you live or own a business outside the official North Carolina disaster area but believe you, too, deserve special tax treatment, you can call the IRS disaster hotline at 1-866-562-5227 to discuss your situation.

Disaster loss claims now or next year: Also keep in mind that for losses suffered in a major disaster area, you get the option to time shift any casualty loss claims.

You can claim the loss in the year it occurred, which means you would do so on your 2011 tax return next year.

Or you can deduct the major disaster losses on the prior year's tax return. In this case, that would be on your 2010 return, which you now have until June 30 to file. If you filed your taxes before the storms hit, look into whether filing an amended return would be beneficial.

And if you do claim the recent storm losses on your 2010 return or file a 1040X to amend your current taxes, write "North Carolina/Severe Storms-Flooding-Tornadoes" at the top of the form so that the IRS can expedite the processing of your refund.

More on claiming major disaster losses can be found in my story Get disaster relief from the IRS, as well as directly from the federal tax collector in:

Here's hoping you never have to deal with disaster losses, major or otherwise, but as we head into the heart of storm season, it never hurts to be prepared.