Saving of the green via budget cuts: Short-term gain vs. long-term rewards

On this day of celebrating all things Irish, NASA's Aqua satellite brings us this out-of-this-world view of the truly Emerald Isle. 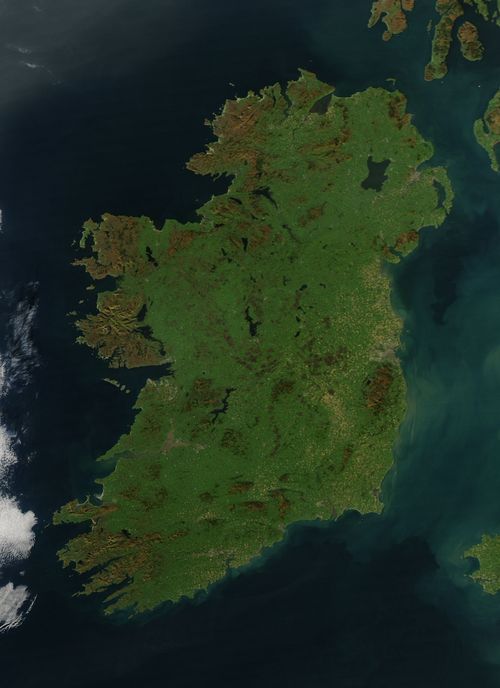 I'm a big space program fan. One of my early childhood dreams was to be an astronaut. But even after I grudgingly let go of that career goal, I've still followed NASA closely.

Now I'm watching sadly as the space shuttle program winds down. I don't like the United State hitching rides from other countries to go into a realm that we once dominated.

But fiscal realities right now don't seem to offer an alternative, at least not the way federal finances are viewed by folks in Washington, D.C.

Kennedy Space Flight center is already making plans to lay off some staff. Managers there might soon be adding to the out-of-work list, as Congressional money counters want additional cuts.

The House Appropriations Committee is working on a new continuing resolution -- the stop-gap funding proposal that Congress has been using to keep the government running -- that includes a $379 million reduction to NASA's proposed $19 billion budget for 2011. If enacted, that would leave NASA with $103 million less than the space agency's 2010 level.

My tax dollars for NASA: It's situations like this that I really like the proposed itemized taxpayer receipt idea.

Of the substantial taxes that the hubby and I paid last year, only $76.25 went to space and science programs, according to the numbers crunched by ThirdWay.org's federal tax receipt calculator.

I'm more than happy to pay that amount or more to keep NASA heading out to infinity and beyond.

Folks who want to trim NASA too often look at the short-term bottom line. I understand; the federal deficit is real and tough decisions must be made on what to cut and how to get money to pay for what we decide to keep funding.

But every business will tell you that some projects offer longer term gains. That's true in government, too, especially with a program like NASA.

Today you and I here on terra firm enjoy many discoveries or processes that were developed by and for or popularized by use in NASA. They include smoke detectors, the ubiquitous bar codes and cordless power tools. Developments in plastics for space are now our food and beverage containers.

And if your in-home entertainment is via satellite television services, thank NASA for coming up with the way that satellite dishes use to clean up TV signals. The space agency had to figure that out so that its communications from space to earth were clear.

Most recently, NASA research and development projects that have been successfully transferred to the commercial marketplace include techniques that strengthen hip implants, upturned airplane wing tips that help save billions in jet fuel and high efficiency lighting system components that have been incorporated into a variety of agricultural greenhouses.

Yes, in most cases, private industry worked with NASA on these projects. But the space agency's needs were what prompted the creations that eventually found their ways into our everyday lives.

And many of the commercial firms are small, without large R&D operations in which they could have independently come up with such advances. They partnered with Uncle Sam to meet NASA's needs and that eventually translated to commercial success for the companies and new cool things for us consumers.

From my standpoint, that's not a bad return on 0.7 percent of my tax dollars that go to NASA.

Great argument and post. Thanks for the heads up!

I'll surrender NPR for NASA. And I'll pay more in taxes for it. Yes, everyone has a pet program. This happens to be mine. But I'm also tired of politicians and partisans picking on easy targets that really don't reduce the deficit while leaving budget hogs alone.

Just another program that is "too important to cut". I'm surprised you didn't throw in a couple of arguments for the simple folks, such as, "It's only a cup of coffee a week" or "It's for the children."

In the end, however, you have to realize that money if fungible, there is scarcity, and we have to consider both opportunity cost and decide how to best allocate the tax dollars. On top of that, we have to prioritize our spending.

I'm surprised to see you take this argument.