We've all gotten those dunning letters that include the statement, "If you've already sent in your payment, thank you and disregard this statement."

Even the IRS includes that line on its CP-14 notices, the forms it sends to taxpayers whom it believes haven't paid their tax bills in full.

Recently, though, the tax agency sent the billing notice to around 200,000 taxpayers in error. 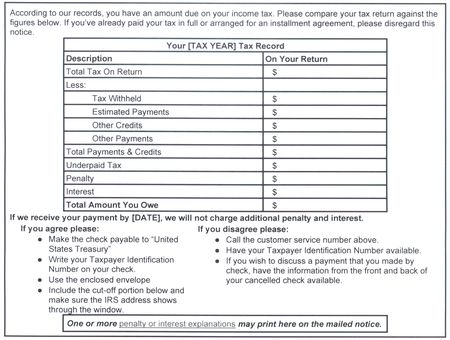 And a formal piece of paper from Uncle Sam saying "hand over your taxes now" is a bit more disconcerting than than a crossed-in-the-mail second notice from a magazine subscription facility.

"My bad" from the  IRS: A computer processing glitch -- this is the high-tech catch-all for the old "clerical error" excuse -- prompted the IRS to mistakenly mail the balance-due notices to taxpayers who had filed electronically.

In most of these mistaken CP-14 cases, the filers just wanted to get the tax filing task out of the way early, but opted to have the amount they owe paid later, usually by automatic withdrawal from their bank accounts, closer to the April filing deadline.

That decoupling of tax form filing and tax debt paying is usually touted as an e-filing advantage. This filing season though, it backfired for these relatively few folks.

The notices they got informed them that Treasury wants the amount of tax they owe by April 15.

That date on the CP-14 also was an error. This year the filing and payment due date is April 18.

But the bigger mistake was that the notices with the alarming "pay up!" message went out at all.

The National Association of Tax Professionals notes that these errant CP-14s were issued too early. They should have been processed after the IRS database had been updated to account for direct debit tax payments.

I know that the IRS has had a lot to deal with this year, what with the delays earlier in the filing season to accommodate changes to forms and the agency's computer system to comply with late-passed tax laws.

But still, folks, telling people they owe when they've already made plans to pay is not good. It's especially troublesome when the messages go to the type of taxpayers -- e-filers -- that you say you love the most

What to do: If you did get a wrong notice and sent in duplicate payment, either by another bank account debit or by check, you'll get your money back. The IRS promises it will issue overpayment refunds.

And if you've already got your tax payment lined up for April 18, then don't worry.

But do check with your bank on the day you instructed the debit to be made to ensure that your tax payment was sent as instructed.

If not, you'll be getting a CP-14 for real the next time.

When the IRS is right: Note, however, that not every "taxes due" notice is a mistake.

If the bank account listed on the tax return was entered incorrectly, a taxpayer would receive a CP-14.

So if get one of these mailings, don't ignore it. The IRS has a special Web page with suggestions on how to handle a balance due notice.

Step one is to check your return to make sure the information on the CP-14 matches your records.

Then call the number printed at the top of the notice to talk with an IRS rep about the account.

If the IRS is correct in finding that you owe it more and you delay payment beyond the April deadline, you'll also end up owing penalties and interest.