Ben Bernanke and his crew at the Federal Reserve Board, aka the Fed, swear that inflation is low. Such assertions make those of us buying gasoline and groceries shake our heads in wonder.

Maybe the differing perceptions come because we motoring food shoppers don't follow the personal consumption expenditure deflator like the Fed does.

This analysis tool is similar to the Consumer Price Index, but is based on changes in prices of items that are actually used during a period, rather than on a fixed basket of purchases.

This week, reports the New York Times, the Fed announced that the January index level was up just 1.2 percent from a year ago.

Even more notable from the Fed's point of view was that the increase in the core rate, the rate that excludes volatile food and energy prices [emphasis mine; I'll get back to this in a minute], was only 0.8 percent.

That's the lowest the core rate has been since the government began keeping the figure in 1959.

Now about my boldface italics regarding what goes into the core rate computations. It's always driven me crazy that economists discount the factors -- food and energy -- that most affect our daily lives.

Maybe the prices on other things aren't going up because there's not much demand. And that demand is low because we potential buyers are all paying more for groceries and the gas we use to drive to buy them.

Those uncounted expenses mean we don't have enough money left over to spend on other noninflated items.

Macro vs. micro inflation: Sure, as prize-winning economists note, the Fed's moves would be more erratic if the Board considered every jump in volatile energy and food prices. So on a macro level, the exclusion of these items makes sense.

But on the micro level,that is, you and me and our "real life" inflation concerns, it's a totally different story.

I guess that's why they call economics the dismal science.

Tacking on food taxes: At least here in Texas we don't face sales taxes on groceries. That's not the case on some other states.

Most of those states tax food at rates lower than the state sales tax rate. But some of them also allow local jurisdictions to add their own taxes on food.

And in three states where no state sales tax is collected on food -- Georgia, Louisiana and North Carolina -- some local governments in those states do tax food purchases.

Some states also provide a rebate or income tax credit for lower-income residents. This is the case, says FTA, in Hawaii, Idaho, Kansas, Oklahoma, South Dakota and Wyoming.

Food fight over taxes: When it comes to food taxes, there's always been the argument that since food is not a luxury, it shouldn't be taxed.

Everyone has to eat, so anti-food tax folks say it's just not right to tax food, especially since these taxes are more of a burden on lower income grocery shoppers.

Of course, from a revenue collection standpoint, that's exactly what makes grocery taxes so appealing. Everyone is buying edible items every day of the week. These taxes bring a stabilizing effect to a state's economy because food sales tend to be consistent.

When lawmakers can't bring themselves to tax all food, they focus on "unhealthy" products, such as sugar-sweetened drinks.

Those food tax issues are being debated now in Utah, where state lawmakers are moving toward upping the Beehive State's food tax and lowering other state sales tax rates.

Complicating tax collection: Food taxes also raise the question of what is food? Or, put another way, what are good foods and what are bad foods?

Full disclosure, I used to work for a major food company that makes a variety of products and the Kool-aid there is that there is no bad food. Even though I'll one day get a paltry pension from the company, I don't necessarily agree with that position, but the debate does raise a lot of interesting issues.

The parsing of food and determining which is taxable is a continual problem in states that collect them.

Let's go back to Utah. Food sellers there have to ask a lot of questions, detailed in the unintentionally amusing food tax flow chart pictured below, before they decide what tax to charge. 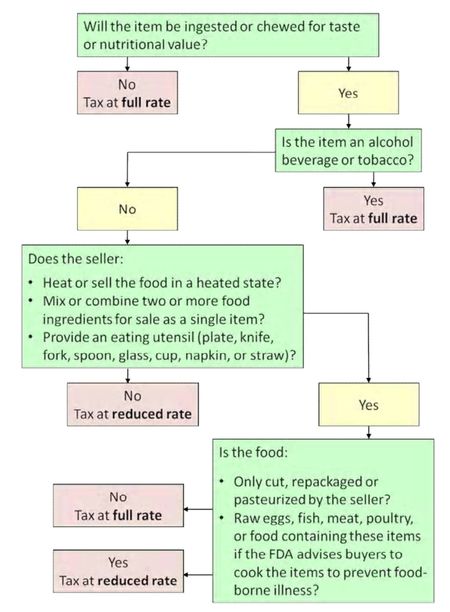 Click flow chart (or here) for a larger view.

My favorite question is the first one: "Will the item be ingested or chewed for taste or nutritional value?"

Does the seller have to ask purchasers?

Does it matter if the "taste" component is good or bad?

And I guess the "ingested" vs. "chewed" query covers the purchase of the product by bulimics.

BTW, In South Carolina there is a local sales tax on food for sales taxes that are collected as part of a local referendum (in Charleston it is 1.5%).

When I wrote about state sales tax for my friends at TurboTax, I noted that in NY, a sliced bagel was taxed, but a whole one wasn't. I can't make this stuff up.

Imported food price is higher could be attributed to the depreciation of the USD. But if measure it in another currency you could have different results. China's inflation problem is the opposite of the US, where a currency that is kept artificially weak is driving higher food prices.

Similarly it is interesting to note that if you measure the oil price in another currency, it has not risen as much. For example the Oil price in Yen is still cost at equivalent to $65 per barrel.