Charlie Sheen, star of the popular CBS sitcom Two and a Half Men, continues to speak out from what has been described as at-home rehab. 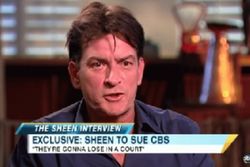 We all have run-ins with our bosses from time to time, but burned bridges, even in today's bottom line, crazy showbiz world where anything goes, can be hard to rebuild.

Second, check into a real rehab facility and stick with the program. It will help you clean up your act sooner.

Some of the costs might even be tax deductible.

Of course, the key word regarding a possible tax write-off for any of Sheen's rehab expenses is "might."

There's not problem with claiming the out-of-pocket costs of drug and alcohol rehabilitation treatments as itemized expenses on Schedule A. This deduction includes inpatient treatment and meals and lodging at a therapeutic center for drug addiction.

Medical costs must meet deduction threshold: The issue is running up enough rehab expenses, along with other allowable medical costs, to deduct.

Any person who pays medical costs that aren't covered by insurance or aren't reimbursed from medical flexible savings account money can only deduct the amount paid for qualifying expenses that exceed 7.5 percent of his or her adjusted gross income (AGI).

And that brings us to our second medical deduction word that demands special tax attention: "exceed."

Your costs must be more than that 7.5 percent threshold before you can deduct them. And then it's only the amount in excess of the percentage that you can claim.

Sheen's high tax hurdle: Sheen makes $2 million an episode. Even with the network pulling the plug on this season's last four shows, he's still raked in a $40 million.

The actor would have to spend lots of time at a pretty swanky rehab center to run up the more than $3 million required for him to claim the medical expenses deduction. He's in Los Angeles, so it's possible, but still, that's a big recovery bill.

But for the rest of us with much smaller incomes, overcoming the medical deduction's hurdle is more achievable.

And we can even count the costs of beating a relatively less serious addiction, such as that nasty nicotine habit we just can't kick.

You also can find a collection of medical tax tips in my posts on how to maximize your medical deductions, as well as related medical deduction links in the item I posted the day I broke my wrist and had some major medical expenditures myself.

And, of course, there's also my story on maxing out your medical deductions.

I hope you stay in good health -- and away from addictive substances! But just in case, at least you now have the scoop on getting Uncle Sam to help cover some of your medical costs.