While most of us are focusing on our annual personal income tax filing tasks, Uncle Sam and Washington State officials are offering some other taxpayers deals with regard to other taxes.

Let's start on the state level. Washington doesn't levy a personal income tax (Evergreen State voters last November shot down an attempt to impose the tax), but it does collect taxes from businesses. Or tries to.

Some business owners haven't been as conscientious as state lawmakers would like.

So now the Washington Department of Revenue is making them an offer it hopes they can't refuse via the state's first-ever amnesty plan.

Businesses that owe Washington taxes -- the state business and occupation tax, the state public utility tax and state and local sales and use taxes -- can pay them without penalties.

To qualify, the business owner has to file an application by April 18 and then by April 30 pay all tax due.

Details on the types of taxes that qualify for the amnesty and other requirements are available at the Washington Department of Revenue's special Pay My Tax website.

When Washington lawmakers OK'ed the amnesty program in December 2010, they said it would provide some economic relief to small businesses that have been struggling with their tax obligations.

At a hearing in advance of the program's approval, Department of Revenue Interim Director Tremaine Smith said the three-month amnesty program could generate $24.4 million in unpaid state taxes and $3.9 million in unpaid local taxes.

Bottom line rules: Washington is just the latest state to try the carrot of reduced or no penalties and interest to get individuals and businesses to pay overdue taxes. 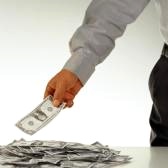 While many folks, especially those who've been diligently paying their taxes over the years, are dismayed with the lenient treatment of tax evaders, the fact is that the programs work. States and local jurisdictions get loads of cash without much effort, or expenditure, on their parts.

Most of the Illinois money came from businesses behind on income and sales tax payments, but nearly 60,000 individuals also handed over around $20 million in back personal income taxes.

Uncle Sam forgives foreign accounts: The federal tax collector also has gotten into the tax amnesty act in the last few years. The IRS has, however, so far limited its forgiveness programs to owners of foreign bank accounts.

In 2009, the IRS got more than 14,700 taxpayers to reveal, and pay due taxes and penalties, on their previously-undisclosed foreign bank holdings.

This latest IRS amnesty -- I'm sorry, Treasury and the IRS prefer the term offshore voluntary disclosure initiative, or OVDI -- involves paying back taxes and interest on any unreported foreign income.

Participants in this latest program, which runs through Aug. 31, also will have to pay a penalty for not filing the appropriate Foreign Bank and Financial Accounts, or FBAR, Treasury Form TD F 90-22.1. This time that's 25 percent of the amount in the foreign account or accounts.

Even with this higher penalty rate, the IRS argues that the 2011 deal still offers "clear benefits to encourage taxpayers to disclose foreign accounts now rather than risk IRS detection and possible criminal prosecution."

In addition, the IRS says its 2011 initiative offers help to people with smaller amounts of undisclosed assets or unusual situations.

"As I've said all along, the goal is to get people back into the U.S. tax system," said IRS Commissioner Doug Shulman in announcing the new voluntary disclosure program. "Combating international tax evasion is a top priority for the IRS. We have additional cases and banks under review. The situation will just get worse in the months ahead for those hiding assets and income offshore. This new disclosure initiative is the last, best chance for people to get back into the system."

If you have an undisclosed foreign bank account and want to now come clean, you can get complete details in the IRS' general disclosure questions and answers, its document outlining How to Make a Voluntary Disclosure and at the special 2011 OVDI FAQs page.

And if all your unpaid taxes are on domestic earnings in one of the other 49 states, just wait. There's a good chance that your local jurisdiction(s) will soon offer you a tax amnesty, too.

Thanks Kay Bell for this article. I live in Washington State and somehow this went unnoticed until your post.