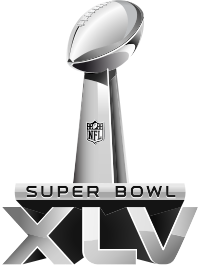 Placed your Super Bowl bets yet? There's still plenty of time. If you're in Las Vegas or some other Nevada locale -- the Silver State is the only one in which sports betting is legal -- sports book operators will be taking your money throughout the weekend.

Most of us probably will just put a few bucks into an office pool. And no one is immune. Heck, even the culture vultures get in on the action.

But my favorite thing about Super Bowl betting is all the variety of prop bets. These are the wagers on the myriad instances, or propositions, that could happen during, or before and after, a game.

Game bet possibilities, such as the mundane who will win the coin toss, which coach will be the first to challenge an on-field call or whether Aaron Rodgers or Ben Roethlisberger will throw the game's first touchdown, are too many to count.

The real fun, though, is with the hoopla that's tangential to the actual action on the turf.

Since Super Bowl XLV is in Cowboys Stadium, a popular bet is whether a punt will hit that gigantic scoreboard.

Speaking of the 'Boys, we can't forget the Dallas Cowboys Cheerleaders. The Black Eyed Peas are performing at halftime. Will Fergie wear a cheerleader outfit? And don't worry Will.i.am fans; the rest of the band is part of the many other halftime prop bets out there.

And, of course, there are the TV executive mandated references. How many times during the broadcast will the commentators mention Glee and American Idol?

The bet I want to make? Given the bad winter weather in Dallas this week, I want to put some money down on how often NFL and television executives have already freaked out about 2014's Super Bowl that will be played, weather gods willing, in the open New York Giants/New York Jets stadium in New Jersey.

Is mezo-giganto-gazillion an acceptable number for the bookies?

Check out some of the more exotic and crazy prop bets so far on Super Bowl XLV.

Betting on the best ads: A lot of people watch (or tape/DVR) the Super Bowl to catch all the special ads.

In recent years, the quality has been meh. But with this year's cost for a 30-second spot -- an estimated $2.8 million to $3 million, an increase of up to 27 percent to 36 percent, respectively -- I'm hoping we get some better ones this Sunday.

There is, of course, a prop bet on which Super Bowl commercial will have a higher rating on USA Today's annual Ad Meter. Talk about safe bet, the line in Vegas right now gives the edge to Budweiser.

We also get stories every year about the making of Super Bowl ads, like the one about how a 12-year-old rescued a Coke ad. And no, I'm not talking about the Mean Joe Green spot, although it would be great if Coca-Cola resurrected that one since the Steelers are playing.

Of course, that wave of laughter I hear rolling across the blogosphere underscores why the IRS will, once again, be the big loser when it comes to bets on the big game.

But, hey, I had to remind you.

Now I'm off to see if I can place a bet on when Jerry Jones will hire a real general manager so the Cowboys can be competitive again. And yes, I know the odds are very, very long, but a fan can hope for a big payoff, can't she?

Such a great article. I never knew about this before. Such as winning are indeed taxable? I thought it was not.

I got so many points here, that's why i love reading your post. Thank you so much!