Sometimes when folks are desperately seeking tax deductions, they take allowable write-offs a little too far.

Case in point, the tax returns of Anietra Y. Hamper.

When Hamper was an anchor for morning and noon news programs at WBNS, Channel 10, in Columbus, Ohio, she was required to maintain a specified professional appearance as described in the television station's Women's Wardrobe Guidelines.

Hey, as Joe Kristan notes over at Tax Update Blog, it's not cheap to look good on HDTV. 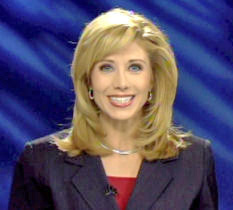 On the IRS tax runway: As you can see from the photo of Hamper at work, she followed the station's clothing guide recommendation to avoid certain clothing, "such as those with flamboyant or loud patterns which may be distracting on camera … and outfits with buttons or accessories that are overly large, as television tends to make them look even larger."

Unfortunately for Hamper, she also took to heart the station's other apparel advice that the "ideal in selecting an outfit for on-air use should be the selection of 'standard business wear,' typical of that which one might wear on any business day in a normal office setting anywhere in the USA."

The "any business day in a normal office setting" is where she was tripped up on her taxes.

Although Hamper's clothes purchases were a business expense that was, as the tax code demands, ordinary and necessary to her job as a news anchor, the outfits weren't specific to that line of work.

And such specificity is the other key requirements that must be met before you can deduct workplace attire as an itemized miscellaneous deduction.

Finding for the IRS: The U.S. Tax Court agreed with the Internal Revenue Service that Hamper had incorrectly deducted her clothes' costs.

"The law is well settled that expenditures that are inherently personal are nondeductible despite the seeming relation to a taxpayer's business," wrote the Tax Court.

"Although a business wardrobe is a necessary condition of employment, the cost of the wardrobe has generally been considered a nondeductible personal expense … . The general rule is that where business clothes are suitable for general wear, a deduction for them is not allowable."

The bottom line for Hamper after the ruling is that she now owes the IRS $16,492 in unpaid taxes and $3,298.40 in penalties and interest on the tax debt for the four filing years.

Those amounts due the IRS also take into account the Court's denial of many other deductions claimed by Hamper, including business gifts, cable television, car expenses, cell phone, contact lenses, cosmetics, gym memberships, haircuts, Internet access, makeup, manicures, meals, self-defense classes, satellite radio, subscriptions to newspapers and magazines and teeth whitening, all of which she argued were required for her job.

So until television stations start putting on-air employees in identical uniforms (that would be a fun designer job!), all those the TV talking heads are just going to have to pay for their attire without any tax help.

Deductible clothing rules: Hamper had claimed her clothing expenditures as part of the miscellaneous itemized deduction. This category allows taxpayers to deduct unreimbursed employee expenses that exceed 2 percent of their adjusted gross income.

There are lots of things that can help you get over this deductibility hurdle, including workplace clothes as long as the clothing is not suitable for everyday use.

I know what you're thinking. In today's world, fashion is quite flexible. We see lots of people hitting the streets in all types of attire, such as scrubs on folks who have no connection whatsoever with hospitals.

But for those folks who do work at health care facilities and must wear the loose-fitting monotone outfits, they can write off the costs of those uniforms.

They also can deduct the costs of keeping them them clean.

Three clothing write-off rules: As evidenced in the Hamper v. IRS Tax Court case, there are three rules regarding deductible workplace attire and other business expenses.

First, the clothing must be a required part of your job.

You also have to show that this business-related expense is an ordinary expense. This doesn't mean that "ordinary" clothing is disallowed. It means, under the tax code, that the outfit is what others in your same line of work usually wear.

Finally, you must prove that it's a necessary piece of apparel.

In Hamper's case, and it's the same for most of us working schlubs, there usually isn't one outfit we have to put on each day to head to the office.

But police officers, firefighters, many medical professionals and security guards, for example, have no choice. If they aren't in the same kind of uniform that their colleagues are wearing, they can't do their job. So those uniforms are necessary for the work for which they were hired.

Cleaning costs, too: Following those same requirements, the cost of laundry or dry cleaning to maintain the ordinary and necessary attire required as part of your employment also are deductible as miscellaneous expenses.

Remember, though, that if your employer provides you with a clothing allowance to maintain your uniform, you no longer get the tax break or at least not all of it.

It is, after all, for unreimbursed employee expenses.

It's really amazing how you help people to navigate this treacherous system. Thanks!