A chink in the mortgage interest deduction armor?

The Treasury Department on Friday delivered a report to Congress that it says "provides a path forward for reforming America's housing finance market." 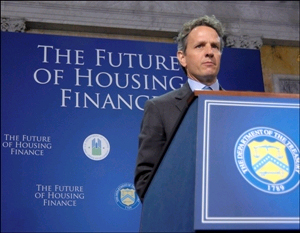 Reforming America's Housing Finance Market, a joint effort by the Departments of Treasury and Housing and Urban Development, focuses on the  Obama Administration proposal to "wind down Fannie Mae and Freddie Mac and shrink the government's current footprint in housing finance on a responsible timeline."

But the plan also examines other housing reforms that could help fix what it calls the fundamental flaws in the mortgage market. These include stronger consumer protection, increased transparency for investors, improved underwriting standards and the general catch-all "other critical measures."

One of those other measures appears on page 25 of the report. It's only a fleeting mention of what most consider a sacrosanct tax break, the itemized deduction of mortgage interest.

But that it was mentioned at all has sent shudders through the housing and real estate industries, as well as giving homeowners pause.

Here's the passage from the report:

Incentive for Investment in Housing. Government support makes investment in housing more attractive. While this can broaden access and lower costs for borrowers and communities, it can also draw investment away from other areas that may lead to greater long-term growth or job creation and it can inflate the value of housing assets, possibly leading to larger boom and bust cycles. Without government support, however, some of the capital invested in the housing market today may simply move to investments outside the United States that offer better risk-weighted returns. Other government policies, such as tax incentives like the mortgage interest deduction and other tax credits can also encourage investment towards housing over other sectors in the economy.

If you're not a real estate agent or a home builder or a person who claims thousands of dollars in mortgage interest on each tax return, you've got to agree that Treasury and HUD have a point. Our economy has been housing heavy and we're now paying the price.

Heck, even if you do personally benefit from the mortgage and other home-related tax breaks, if you're honest with yourself, you've got to admit that we're getting a deal from Uncle Sam that many of our fellow taxpayers aren't. And folks in other countries seem to buy homes just fine without any tax deduction help from their governments.

But logic doesn't make the possibility of losing the home mortgage interest deduction any easier to take.

Sure, the premise is that overall rates would be lower, as proposed by the deficit commission in its Zero Plan, so that we interest-paying homeowners wouldn't miss the deduction. But I know I'd like guarantees that the rates would indeed drop. I'd also like to run the numbers myself to be sure.

And that's just me (and the hubby). We also have upset industry reps, aka contributors to political action committees (PACs), that are already gearing up to fight any attempt to repeal this (and other) home-related tax breaks.

Still, its' getting tougher to justify such tax policies. There's the ginormous federal deficit and the gung-ho group of newly elected Representatives and Senators who want to cut any and everything.

So the once well-protected mortgage interest deduction might just have a chink in its armor.

Of course, things rarely happen quickly on Capitol Hill. There will be many hearings and debates and bills introduced and amendments tacked on to other legislation and rants and raves from hosts and guests on television and radio programs.

But eventually, there's likely to be some change in the mortgage interest deduction policy.

When it does happen, the change will be phased in or, depending on your perspective, the deduction will be phased out, so as not to cause immediate shock to the housing sector and taxpayers claiming it.

Where to start: There are some relatively easy adjustments that could be made.

First, restrict the interest deduction to primary residences only.

Right now, you still can deduction interest on a loan for a second home. Owners of second homes already got whacked tax-wise a couple of years ago when the law was changed to essentially require them to pay more taxes on any sales profit of their other properties.

Also do away with the deductibility of home equity loans or home equity lines of credit (HELOCs). These obviously were more popular when home values were higher. But the fact that people aren't getting so many home equity loans now just supports the argument that we can do without them.

Not to be too maternal here, but folks really need to quit thinking of their home as an ATM. Yes, I know some people use equity loans to improve their residences or made critical repairs. Others get the money to pay for a child's education. To them I say start saving.

Finally, lawmakers can limit the total mortgage amount upon which interest deductions are allowed. Right now that's $1 million. Cutting it in half should send a few more tax dollars Treasury's way without disrupting the deduction for most homeowners.

I'm sure these and many other suggestions regarding the mortgage interest deduction and other homeowner tax breaks will be discussed as Congress works it way through the budget process.

Do you claim the mortgage interest deduction? Did the tax break make a difference to you when you bought your house? Would you give it up for lower tax rates?

In addition to reading the full report, you can find more on the proposals and reaction to them in the New York Times, the paper's DealBook blog, Reuters, TaxVox, Business Insider,  GPB News, the Washington Post and NPR.

If the mortgage deduction is eliminated, the motivation to own a home would fall, especially where home values
are not appreciating. Special interest groups will oppose even the smallest change.

Joe, your points about not undercutting the fragile housing recovery are well taken. I suspect any changes to home-related tax breaks will be well down the road and slowly implemented. As for second homes, I'm not targeting those who can afford them. I'm just thinking that when it comes to paring down home-related tax breaks, the simplest thing would be to restrict them to primary residences. But whatever deficit cutting tax changes are made, someone will suffer. In the home area, second homes and equity loans are a smaller group than principal owners.

In any plan to change taxes, it seems a bump up by eliminating certain deductions runs a risk at the margin. It's easy to say that the couple that has a second home doesn't 'need' the mortgage deduction. Yet, at any income level it's possible to be at the tipping point, where any reduction in income (or increase in tax burden) can put one in a position to consider walking away. The housing crisis isn't yet over, and I think any push to the downside however subtle is a risk.
At this point in my life, 48 yrs old, 7 yrs left on my mortgage, my mortgage interest is 1/4 what it was when we first bought our house. For me, I don't care what they do, the impact won't make much difference even if they killed the deduction completely. I'm concerned about the bigger picture.