Want to find out more about specific tax expenditures?

Then check out Subsidyscope, a new online tool from the Pew Charitable Trusts. It provides federal tax expenditure estimates from the Department of Treasury and the Joint Committee on Taxation and, in many cases, make side-by-side comparisons of different government estimates of the same tax expenditure.

Tax expenditures -- losses to the U.S. Treasury from certain tax deductions, exemptions or credits to specific categories of taxpayers -- are the new hot phrase, having gotten a lot of attention late last year when the deficit reduction commission released its proposals to stop and reduce our federal debt.

The panel's various tax reform proposals called for the elimination of some or all tax expenditures.

The bottom line is that tax expenditures mean lost revenue.

Subsidyscope utilizes Pew's Tax Expenditure Database, which covers three sectors: energy, housing and transportation. Pew plans to add additional sectors and other features, such as the ability for users to aggregate tax expenditures across various categories. 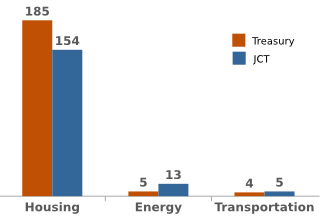 As the Subsidyscope graphic above (compiled from fiscal year 2009 data) illustrates, tax expenditures for the housing sector dwarfed those for the transportation and energy sectors.

The Treasury tax expenditure estimates indicate that the transportation sector for the 2009 fiscal year contained $3.7 billion in revenue losses, followed closely by the energy sector with losses of $5.2 billion.

The fiscal 2009 housing sector, meanwhile,  accounted for more than 18 percent of total federal tax expenditures that year. Or, in dollars, housing tax breaks resulted in revenue losses of $185.2 billion.

With Subsidyscope, says Pew, we can select and aggregate tax expenditures across budget function or economic sector or drill down to find information about individual tax expenditures.

Such analyses could be fun to play with as we embark on the adventures of the now Republican-controlled House and its new "cut as you go" approach.

Whereas the Democrats preferred "pay as you go," which called for the cost of federal programs to be offset by a combination of spending cuts and tax increases, the GOP rule will now require that any proposed increase in federal spending be countered by an equal amount of spending cuts elsewhere.