Welcome to part three of Don't Mess With Taxes' fourth annual Year-end Money Moves series. Today we look at retirement related actions to make, or at least think about, by Dec. 31. 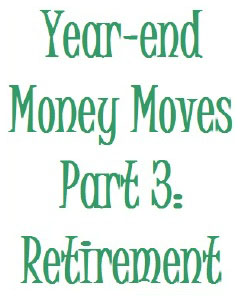 To ensure that you can spend your golden years in the fashion to which you've become accustomed and deserve, you need to start stashing away as much retirement cash as soon as you can.

Fortunately, the tax laws offer some benefits for many retirement vehicles.

Convert to a Roth IRA
Roth retirement accounts are great plans for many folks. Although your don't get an upfront tax deduction, the plans offer many other tax benefits.

Once you turn 59½ and have had the Roth IRA for five years, you won't owe any taxes on distributions.

You can continue making contributions to a Roth for as long as you want, regardless of your age.

And you, not the IRS, decide when to take money out. With a traditional IRA, you have to take required minimum distributions (RMDs) when you turn 70½; you can leave your Roth money alone to keep growing for as long as you want.

Higher income individuals, however, have been locked out of Roths. You can't open or contribute to a Roth unless your modified adjusted gross income (MAGI) is less than $120,000. Married couples' MAGI cap is $177,000.

But thanks to a new 2010 tax law, you can convert your traditional IRA to a Roth regardless of your income. And if you do so by Dec. 31, you can delay payment of any taxes on converted money until the 2011 and 2012 tax years.

Should you convert? Maybe. Maybe not. But the tax deferral option, especially now that it looks like high-income earners will get to keep their current low income tax rates, makes the option worth looking into.

Remember your RMD
In 2009, requirement minimum distributions (RMDs) were waived. They're back this year.

RMD rules apply to all employer sponsored retirement plans: profit-sharing plans, 401(k) plans, 403(b) plans, and 457(b) plans. The distributions also are required from traditional IRAs and IRA-based plans such as SEPs, SARSEPs, and SIMPLE IRAs.

When you turn 70½ you have to take your first RMD for that year. But that initial RMD can be postponed until April 1 of the next year.

For all subsequent years, though, including the year in you took your first RMD on April 1, you have to take the distribution from your retirement accounts by Dec. 31.

So if you must take an RMD from a plan and haven't yet, do so soon. There are stiff penalties for ignoring this rule.

Contribute to your IRAs
Regardless of what type of retirement plan you have, contribute to it now. For the 2010 tax year, you can contribute up to $5,000 to an IRA, either traditional or Roth. If you're 50 or older, you can put an extra $1,000 into the account as a catch-up contribution.

True, in tough times, it's hard to find the cash to go to something that seems so far away. But any amount you can put into your retirement account(s) will help.

And true, you have until next April 15 (or later in some cases; see the self-employment retirement accounts section below) to contribute to an IRA, either a Roth or traditional account. But the sooner you add money to the account, the sooner it starts earning. And the power of long-term compounding is a future retiree's best friend.

Open or add to your workplace plan
In recent years, a lot of cash-strapped folks stopped contributing to their workplace retirement accounts. Some even raided these nest eggs to cover day-to-day expenses.

No judgement here. We all do what we have to do. But when you're feeling more financially secure, start putting money back into your 401(k), or 403(b) if you're a public employee.

Contributing is especially important if your company matches a portion of your contributions. If it does and you don't take advantage of the match by putting in some of your own money, you are passing up free retirement funds.

If you can add to your plan now, do so. If you have to wait, at least make yourself a note to start contributing or up your contribution level as soon as your plan allows.

Open a self-employed retirement plan
If you work for yourself, either full-time or on the side to supplement your wage income, you can contribute to a separate retirement savings based on those extra earnings.

Some types of self-employment retirement accounts can be opened for a tax year up until that filing's deadline plus any extensions you might have earned. For example, you can open a 2010 SEP as late as Oct. 15, 2011, as long as in April you got an extension to file your tax return.

However, some of these self-employed retirement accounts, such as a solo 401(k) or Keogh, must be set up by Dec. 31.

Whew! It takes a lot to get ready to retire. Here's hoping some of these suggestions of moves you can make before year's end will help you escape the rat race as soon as possible.

I'll be back tomorrow -- I promise this time! I know this post is a tad late. I'm blaming the Obama/GOP tax deal; everyone else is! -- with year-end tips for charitable giving.

Okay, you know I can't just move along after reading any post that discusses Roth IRAs.
So I'll offer the one bit of my favorite advice to the discussion.
A large chunk of us (I suspect over 40%) are in the 15% bracket. Why not take a look at what you forecast your 2010 taxable income to be, and convert enough to "top off" that bracket? If you go a bit over, no harm, just recharacterize the exact overage before 4/15/11.

The toughest part of being a financial writer is trying to address a topic that may have different answers depending on the reader's situation. Your age, income, direction of that income, as well as accumulated wealth all can impact the right decision.