The price of the 12 Days of Christmas

For the last 27 years, folks at PNC Financial Services have crunched numbers to find out how much it would cost to buy each of the gifts mentioned in the traditional holiday song The 12 Days of Christmas.

The annual accounting has become known as the Christmas Price Index.

In much the same way that the Consumer Price Index measures changes in prices of goods and services, the Christmas Price Index tracks what it cost seasonal song's true love. 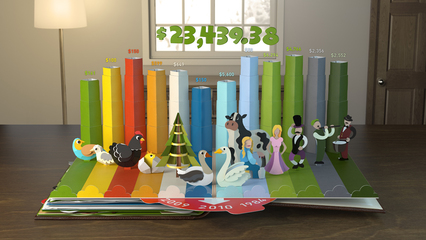 You can see an animated version of the Christmas Price Index
pop-up book pictured above by clicking on the photo (or here).

When all the verses are completed, they add the prices of the 78 gifts to arrive at the total cost of Christmas.

Although economists keep telling us that inflation is low, that total is up 9.2 percent, or $1,974, from last year.

In fact, the 2010 figure represents the second highest increase ever and largest percentage hike since 2003 when the Christmas Price Index rose 16 percent.

What cost more: "This year's jump in the PNC Christmas Price Index can be attributed to rising gold commodity prices, represented by the five gold rings, which went up by 30 percent, in addition to higher costs for wages and benefits impacting some entertainers," said James Dunigan, managing executive of investments for PNC Wealth Management, in releasing this year's figures.

Yep, those nine ladies dancing, 10 lords a-leaping, 11 pipers piping and 12 drummers drumming can drive up a party's cost. None of these performers, notes PNC, received a wage increase last year so they were playing  catch up in 2010.

There were, however, a few bargains this year, according to the Christmas Price Index.

The single partridge in a pear tree, four calling birds, six geese a–laying and the eight milk maids came in at the same price as in 2009. It's good to know that the milk accompanying Santa's cookies won't break the bank.

The cost of cyber convenience: The $23,439 and some odd cents amount is what you'd pay if you bought regular retail.

But if you prefer shopping online, be prepared to pay more, say PNC Christmas price indexers.

That online purchase total also was up 9.2 percent, but the actual dollars are substantially more. True loves who shop electronically will pay a grand total of $34,336.

"In general, Internet prices are higher than their non-Internet counterparts because of shipping costs for birds and the convenience factor of shopping online," Dunigan said.

Well, I know the hubby did some shopping online this year, but I haven't heard bird calls from any boxes under our tree so I think we're OK this year as far as the Christmas Price Index goes.

I wouldn't complain too much, though, if just one gold ring happened to be inside one of those packages!