One of my favorite Joni Mitchell songs, The Windfall (Everything for Nothing), begins with the lyric "Because Elvis gave 'em cars, you think I'm cheap."

If Mitchell were writing that song now, she'd have to change Elvis to Oprah.

Yep, the queen of daytime TV is at it again. As she winds down her days on broadcast television, Oprah is pulling out all stops, including some old publicity grabbing ones.

Last month, as part of two days of Oprah's "Ultimate Favorite Things," she gave audiences of slew of goodies, including a 2012 Volkswagen Beetle.

This was a repeat of sort of her 2004 program in which she gave a new Pontiac to each of her 276 audience members. That event has been selected as television's greatest surprise.

It turned out to be a surprise in more ways than one.

Soon, though, the new auto owners were the ones screaming as they learned they owed federal income taxes on the value of the vehicle.

But Oprah learned her lessons, both in how she gave away the auto as well as its associated taxes.

Oprah was a bit more restrained this time in her car prize announcement. She even urged the screaming studio audience members to calm down and predicted they all would soon be a Saturday Night Live skit. 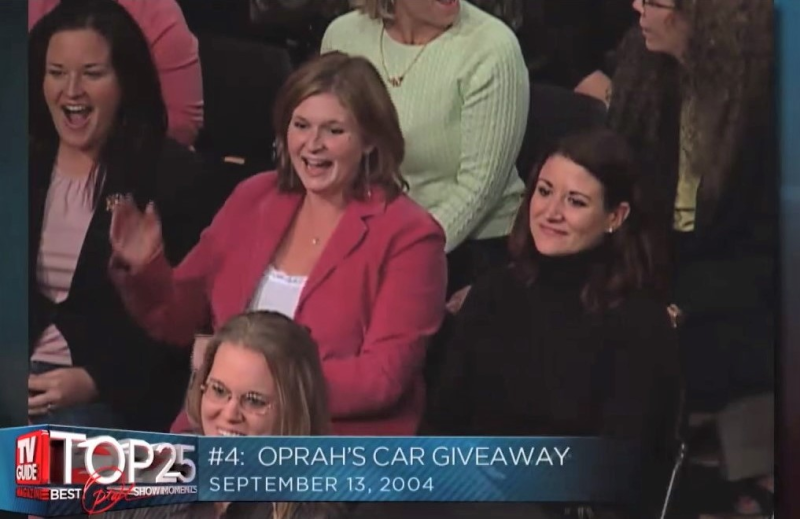 And on the tax side, Volkswagen's gift of the cars also includes the recipiencts' tax bills. It's not clear if that's just the amount due the IRS, or any state tax liability, too.

As for the other goodies, Oprah's people said the show "makes a good faith estimate of the tax due for each audience member and pays this on their behalf."

Not so fast with the taxes: Still, John Crudele of the New York Post was a bit skeptical. So he checked with a Big Apple tax lawyer/CPA who pointed some of the interesting, and -- no surprise here -- complicated tax particulars still left up in the air in connection with Oprah's latest car gift.

First, the cars are not gifts from Oprah. If they were, the folks who got them wouldn't have to worry at all about taxes. That would be Oprah's concern.

As the gift giver, she'd be responsible for gift taxes on the total value of goods given to each person that exceeded the 2010 gift exclusion amount of $13,000.

Car tax complications: The offer/effort by VW to cover the car taxes also is not clear cut.

Each of the 300 audience members who got VWs pays taxes at different rates.

Plus, they won't really know what the gifts are worth until the fair market value of the vehicle is determined. That will be a while, since the completely redesigned auto hasn't hit the streets yet.

So the fair value might end up being more than the selling price. And if that happens, any tax covered by VW and/or Oprah might not be enough to satisfy the IRS. In that case, the new car owners might owe additional tax.

And, says the NYC tax attorney, Oprah's gifts alone could bump some of the recipients into higher tax brackets.

All these complications is why I stick to my motto, for work compensation, gifts and prize winnings, of say it with cash!

That was an interesting eye-opener. I just can't help but wonder how many buyers actually take all those after purchase car costs into account.

There's something to think about whenever you buy or win a car. There really is more to owning a car than simply just having it.