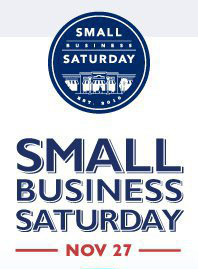 As you might have suspected, this event is the creation of a company that wants you to use its product. American Express came up with the idea.

The goal, according to the charge card company, is to highlight the importance of small businesses at a time -- between yesterday's Black Friday and the upcoming Cyber Monday --  when so many people are shopping at malls, big box retailers and online.

So despite its blatant commercial creation, I encourage you to visit a locally-owned store in your community today and any other days you can.

And use whatever payment method works for you.

But if you do opt for Amex, the company will give a $25 credit back to registered card holders (you can sign up at the Small Business Saturday Facebook page) who spend at least that much at a small business today and put the purchases on their American Express cards.

Tax moves businesses can make: Although every business, small or large, depends on customers, there are some tax moves companies can make as the year winds down to keep as much money as possible out of the IRS' hands.

Many of the tax breaks are in the recently enacted Small Business Jobs and Credit Act. Some others come from earlier legislation, such as the Hiring Incentives to Restore Employment, or HIRE, Act.

Here are some highlights from those bills and other laws of tax moves you can make now to help reduce your business' 2010 tax bill.

Section 179 deduction: Under Section 179 of the tax code, a business may "expense," or deduct in the tax year in which the expenditure was made, the cost of qualified assets placed in service during the year. Eligible expenditures generally are those of tangible business property, such as equipment, computers and furniture.

The Section 179 deduction is reduced on a dollar-for-dollar basis if the cost of assets placed in service exceeds a certain amount, but that threshold also was hiked, from $800,000 to $2 million for tax years 2010 and 2011.

Bonus first-year depreciation: If you can't use the 179 deduction fully because of the provision's limit, you still can write off the costs over time under regular depreciation rules.

And through Dec. 31, you have the option to deduct 50 percent of depreciation of newly acquired property in the first year of its service.

Note, however, that no deduction is allowed until the tax year in which you start "active conduct" of the business.

Repairs and improvements: Generally, if you simply repair a business asset, you may deduct the entire cost. But the cost of an improvement to business property must be capitalized.

So make repairs before the end of the year to offset your taxable income for 2010.

Be careful, though. If you make repairs and improvements at the same time, the IRS may include the cost of the repairs with the improvements, costing you an immediate tax break.

Manufacturing deduction: Under IRC Section 199, a deduction is available for a business with "manufacturing" activities. For 2010, the write-off is the lesser of 9 percent (up from 6 percent in 2009) of either taxable income from qualified production activities or taxable income.

The "qualified production activities" eligible for claiming the deduction are pretty broad. The key requirement is that the manufacturing activity be based in the United States.

Beyond that rule, qualifying business activities include selling, leasing, or licensing items that have been manufactured in the United States (including movies); U.S. construction services, including building and renovation of residential and commercial properties; engineering and architectural services relating to a U.S.-based construction project; and software development, including of video games, in the United States.

Did I mention that the business has to be conducted within America's borders?

Social Security wages and worker retention: Under the HIRE Act, an employer's share of the 6.2 percent Social Security tax on wages is waived when a "previously unemployed" worker is hired. The law also provides for a special employer tax credit for retaining the worker. Both tax breaks expire at the end of 2010.

Bad business debts: In this tough economy, many businesses are having trouble collecting some debts. As a general rule, a business' bad debts may be deducted from gross income when they become worthless.

Keep records of all collection efforts -- letters, telephone calls, e-mails and collection agency activities -- to support deductions based on the worthlessness of the debts.

If you have such uncollectable debts, now is the time to make sure you have the documentation so you can deduct them on your company's 2010 tax return.

Here's hoping that your small business is filled with shoppers today, and that you qualify for lots of tax breaks that can reduce your 2010 tax bill.

Get tax suggestions. Exact info I was looking for.