The future of the expiring Bush tax cuts is still in flux, but the Nov. 2 election results make it seem more likely that all the tax breaks will continue, at least for a while.

As noted in my future of capital gains taxes post last week, that will keep the tax rate on profits from the sale of long-term assets at 15 percent for folks in the upper income tax brackets. And investors whose income is in the 10 percent or 15 percent bracket won't owe any capital gains taxes.

But another investment component also gets preferable tax treatment under the Bush cuts: Dividends.

The current tax law, qualified dividend income is taxed the same as long-term capital gains, that is, at a maximum tax rate of 15 percent. Similarly, those in the two lower income tax brackets received certain dividends tax-free.

The qualifying dividends are those paid by domestic and some foreign companies. That's why your annual 1099 from your investment manager classifies the payments into ordinary and qualified dividends.

Without this special treatment, dividends would be treated as ordinary income, meaning they could be taxed at the top marginal tax rate, currently 35 percent (or as high as 39.6 percent in 2011 if the tax cuts expire). 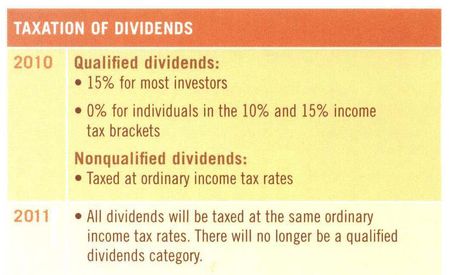 Election implications: Before the midterm election, Senate Finance Committee Chair Max Baucus (D-Mont.) said he planned to introduce legislation that would set both the top dividends and capital gains tax rates at 20 percent.

The thought was that by allowing the capital gains rate to return to 20 percent, but capping the dividends tax rate at that same level, investors still would enjoy some preferential tax treatment. And the increase in the investment tax rates would produce some tax revenue to help pay for permanently extending middle-income tax cuts.

Concerns about the dividend tax rate also are exacerbated by the impending 2.8 percent health care surtax on individuals earning more than $200,000 per year (or $250,000 for married couples) that goes into effect in 2013.

If dividend are taxed at ordinary rates, and that top rate is 39.6 percent, then the dividend tax would be the highest income tax in the country when the surtax kicks in.

Despite the victories by deficit hawks last week, it's not clear if they'll sacrifice any tax cuts to save some budget dollars. Their goal, at least right now, appears to be holding firm for keeping the current tax cuts, including a maximum 15 percent dividend rate, in place.

So if Baucus insists on his proposal to slightly increase the dividends tax, there could be a battle royale on Capitol Hill.

But then, what's so unusual about that?

What are dividends? Last week I noted an infographic from Mint.com that used visuals to explain capital gains. Well, the personal finance website has a similar detailed image answering the question what are dividends?

That's a reproduction below. You can click it for a larger view; you might have to give the image a second click when it opens in a new window.

The way I've been referring to these infographics, you'd think that Mint.com was paying me! And if you guys want to do that, that's cool with me! Just drop me a note!

Hi! This is such a great article and I am sure a lot of money saving addicts are going to benefit from this. Keep it up! I am Diana Mathew, an Australian Entrepreneur, ebook author (The Money Tree by Diana Mathew) and a Saving Money guru. If you have time, maybe you can visit me too:
http://www.mymoneytree.com.au