Bill James to Simpsons viewers: 'I made baseball as much fun as doing your taxes'

Baseball fans live and die by the numbers. That's why Bill James, the man who created the comprehensive statistical discipline Sabermetrics, is a god those who obsessively follow the game.

Apparently, Lisa Simpson is one of such fan. And James is a fan of Lisa and her animated family.

In last week's episode of the Fox Television program, James poked fun at himself, the game and its fans. Here's how NESN Newswire writer Michael Hurley describes the scene:

As four nerds sat around a table at Moe's, the nerdiest of them all, Professor Frink, told Lisa that "baseball is a game played by the dextrous but only understood by the poindextrous." He then showed Lisa his laptop, which featured a smiling Bill James. 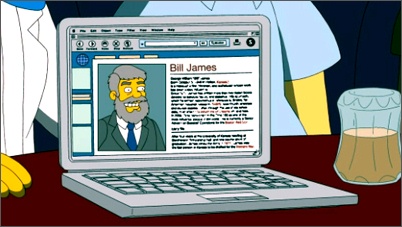 "I made baseball as much fun as doing your taxes," said the revolutionary number cruncher.

As a baseball fan, Simpsons viewer and tax geek, I've got to thank Matt Groening for bringing all three together, at least in fictional Springfield.

If you missed The Simpsons episode, entitled MoneyBART, you can check it out on Hulu.com.

By the way, do you know which real minor league baseball team is the probable inspiration for the Springfield team's name Isotots? Tell us in the comments section.