We're all too familiar with the natural disasters that destroy property. We've recently seen the damage from tornadoes in Arizona, flooding from heavy rains in the Northeast and  wildfires that have ravaged Colorado.

In these and other types of casualty losses, natural or otherwise, property owners might be able to get some relief by claiming them on their tax returns.

But a new threat to homes cropped up a few years ago: defective or tainted drywall.

Much of the construction product was fabricated in China and imported for use in U.S. houses between 2001 and 2009.

And while not all drywall manufactured in China is defective, since a substantial amount of the questionable product did come from that country, the issue has become known as  Chinese drywall damage. 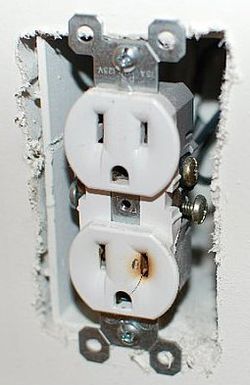 Damages due to defective drywall: Drywall that is faulty has been found to emit sulfur gas which corrodes copper and other metal surfaces, leading to damages in electrical wiring, copper plumbing and air conditioners and other appliances and electronics.

The questionable drywall also is believed to cause adverse health effects, although experts disagree on the types and extent of the potential health hazards.

As of August, the Consumer Product Safety Commission (CPSC) had received 3,526 reports of drywall damages from 38 states, the District of Columbia, Puerto Rico and American Samoa. More than 90 percent of reports are from five states: Florida (58 percent), Louisiana (19 percent), Mississippi (6 percent), Alabama (6 percent) and Virginia (4 percent).

A study released in January by the CPSC reported that an indoor air study of a sample of 51 homes showed a strong association between the problem drywall, levels of hydrogen sulfide in those homes and corrosion of metals in those homes.

Deductible or not? When reports of the drywall-related damages began showing up, homeowners who were faced with repair (or in some cases, totally reconstruction) costs began wondering if they could turn to the tax code for help.

Specifically, they wanted to claim the damages as casualty losses. Thus began the tax deduction debate.

Was this natural wear and tear? If so, it wouldn't qualify as a deductible loss. No, argued the homeowners, there's nothing natural about it.

Plus, they noted, the damages that arose from the drywall definitely were unexpected. That's one standard that must be met for a casualty loss to be claimed.

To pursue their tax relief, homeowners contacted their members of Congress. Capitol Hill then began pressuring the IRS to let folks claim drywall-related damages as casualty losses on their taxes.

That political insistence, along with the CPSC studies, convinced the IRS. The tax agency has now determined that certain drywall-associated losses can be claimed by affected taxpayers.

IRS to allow drywall casualty claims: However, because of the special nature of the drywall damages, the IRS has issued special rules for such claims.

In Revenue Procedure 2010-36, the IRS has provided for the treatment of damages from corrosive drywall as a casualty loss and provided a "safe harbor" formula for determining the amount of the loss.

Finally, a taxpayer who has been fully reimbursed before filing a return for the year the loss was sustained may not claim a loss.

And a taxpayer who has a pending claim for reimbursement (or intends to pursue reimbursement) may have to report such reimbursement as income or claim an additional deduction in subsequent taxable years, depending on the actual amount of reimbursement eventually received.

Thank you for the comprehensive article.

Because this is based upon when the "payments" are made, rather than when the disaster occurred (as with other "casualty loss" claims) it creates some confusion when "payments" occur over two calendar years.

How does the IRS treat this situation? Can the homeowner recover those payments from both 2010 and 2011, or are they limited to payments made in only one "year".