Have you recently been hearing more about the new health care law?

Of course you have. The midterm election is less than three weeks away and in most Congressional campaigns, the Patient Protection and Affordable Care Act, aka health care reform, is a hot topic.

The health care measure was signed into law in March, but its many provisions are being phased in over several years. Its full effects won't be in place until 2014.

In April, the IRS allowed parents to add their uninsured dependent adult children, age 26 or younger, to their medical insurance coverage.

Then on Sept. 23, six months after health care reform became law, additional provisions kicked in. They include, in part, free preventative care, no pre-existing medical condition exclusions for sick children, protection against canceled coverage and no lifetime coverage limits.

Misinformation circulating, too: But along with the accurate reports about the health care law's changes, there has been a lot of bad information.

One of the more persistent rumors is that the new law will require workers to pay taxes on the value of their employer-provided medical coverage.

The coverage's value and, according to the incorrect reports, the taxes due, will be included on employee W-2 forms, the statements that workers (and the IRS) get each January, detailing employees' wages and tax withholding.

Alerts of this new health care law requirement and alleged tax implications have been showing up for months in e-mail boxes. But the warnings are wrong.

Sure, the employee health care rumor contains a bit of truth.

The Patient Protection and Affordable Care Act does indeed include a requirement that the value of each employee's workplace-provided medical coverage be reported.

But the health coverage data is informational only. It's a way for employees to know exactly what their boss is paying for their health benefits.

That year, the law calls for employers to include on each worker's W-2 for the prior year (that is, for tax year 2011) the aggregate cost (the IRS will issue a ruling on this later) of employer-sponsored group health insurance coverage, excluding any salary reductions deferred to a flexible spending account.

Benefits reporting delayed: Now, however, the IRS has announced that the 2011 W-2 workplace health insurance information reporting will be optional.

The Treasury Department and the IRS determined the delay was necessary so that employers have enough time to make changes to payroll systems to comply with the new reporting requirement. 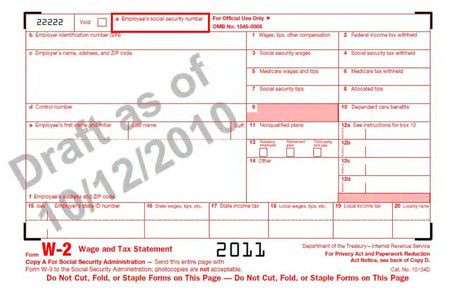 And that form for the 2011 tax year makes it clear that the amounts of health care shown on the document are not taxable.

On the back of Copy B, the one that businesses send to employees, is the following notation:

The bottom line is that everyone can take a breath.

Businesses won't have to hassle with reporting workers' 2011 health care coverage values. And when such reporting does got into full force, the information won't affect insured workers' tax bills one bit.