We're always advised to get receipts for our tax-related expenditures. Not having documentation could be quite costly if the IRS ever questions an itemized deduction or business expense.

Well, the folks at Third Way, which describes itself as "the leading moderate think-tank of the progressive movement," took that taxpayer documentation concept to the next level.

"We suggest that everyone who files a tax return receive a taxpayer receipt.' This receipt would tell them to the penny what their taxes paid for based on the amount they paid in federal income taxes and FICA," said David Kendall and Jim Kessler, policy specialists for the group.

The duo took a collection of data (polls, IRS statistics and government budget documents) and came up with the payment ticket shown below (or on page 3 of their full taxpayer receipt brief). 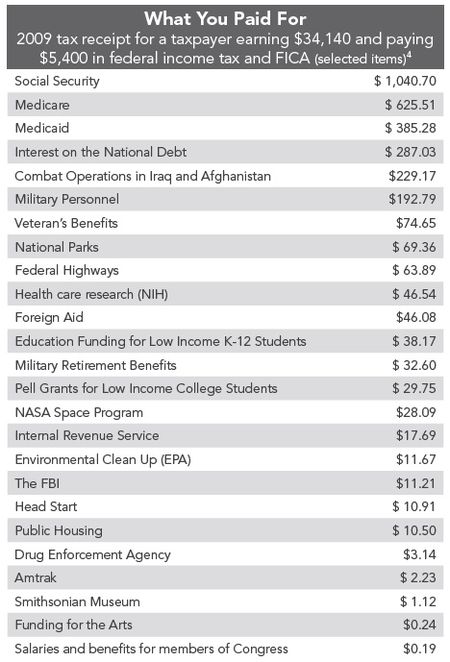 The $34,140 figure used to create the Third Way taxpayer receipt came from the IRS.

Some folks have already raised question about the actual numbers and the calculation method. But the concept itself is intriguing.

And Third Way contends that it wouldn't be too difficult or too expensive for Uncle Sam to do the same for each of us.

"The mathematical formula to do this is very simple. The Social Security Administration does this every year through the mail to tell people what they can expect from Social Security in the future. This would be far easier. It could also be done online. An IRS website should be available so people could key in the amount they pay in taxes and a receipt pops up showing several dozen recognizable programs and the amount that went to each of them."

The bigger hurdle likely would be getting Congress to authorize the IRS to create website receipt calculator.

I'm not sure a bipartisan majority of Senators and Representatives want to know the per-taxpayer spending breakdown themselves, much less share the info with us!

"It's so upsetting that funding for the arts is at the very bottom. So sad."

It doesn't upset me. Art is a completely personal and should be supported as such. There's no need for my .25 to indulge someone else's taste in music, sculpture, or paintings. Classical art and music will still be around if the NEA disappears.

What is a tad disturbing is how much money is getting dumped into social services. What I mean that is Social Security and Medicare and Medicaid will need more funding in the near future. I don't see how we even keep level funding and support foreign wars and the national debt. I'm not against social safety nets but I'm not sure I see how we afford everything going forward.

I think a lot of tax payers would be shocked and dismayed if they saw how their tax dollars were spent. This receipt concept is a way to bring the govt.'s tax spending to a very personal level.

It's so upsetting that funding for the arts is at the very bottom. So sad. Great blog by the way.