States that get the most federal money

Texas has always been a independent place, both literally when we were the Republic of Texas and now in how we live our 21st century lives.

In general, that's a good thing. The "just get it done" approach tends to mean folks here, well, just get stuff done.

But during an election year (which is starting to seem like every year!), our can-do attitude tends to get perverted into jingoistic campaign sound bites. You know who you are, so I won't name any names <cough…governor…cough> but it's time for less talk and more walk.

We Texans, however, are not alone in chanting mantras of independence. Most western states feel the same way. Heck, if our forebears didn't have that mindset, we'd all be living no further west than Ohio right now.

That said, we are the United States and every state depends to some degree on federal funds.

And one of the great ironies of our country and its finances is that the American West, more than any region, has been historically dependent on the federal government, says economist David Barker, who teaches at the University of Iowa.

In fact, Barker himself wrote an analysis of whether the purchase of Alaska was a good deal for the U.S. From a purely fiscal standpoint, probably not. (Hey, don't shoot the messenger! Some folks offer rebuttals to Barker's findings in a recent Economix column.)

But the fact remains, The Last Frontier is now a federal aid magnet.

And here is where the intersection of attitude and dollars collide.

While no place benefits more from federal largess than Alaska, its governor denounces "intrusive" federal policies, officials sue to overturn the new health care law and the victor in the Republican primary for U.S. Senate is an avowed "no federal funds" fellow.

Alaskans, however, tend to live with such contradictions in these recessionary times, notes Michael Powell's recent Times' article Leery of Washington, Alaska Feasts on Its Dollars. 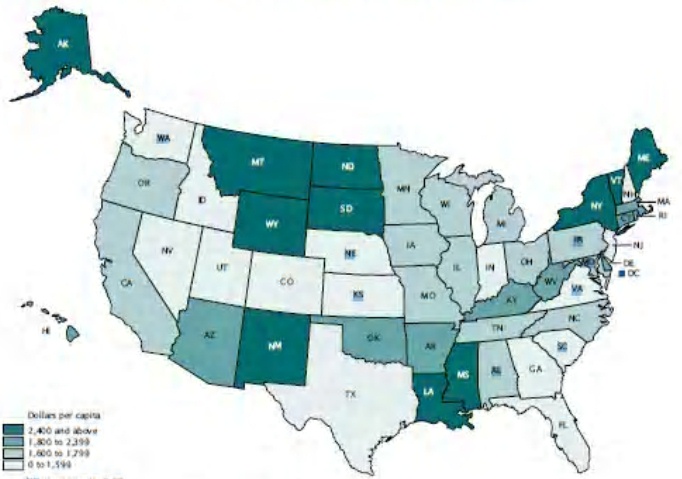 In 1996, reports the paper, federal spending in Alaska was 38 percent above the national average. Today, Alaska's share from Uncle Sam is 71 percent higher than the national  average.

Coming in second in the federal funds race is another Western state, Wyoming. New Mexico is third, North Dakota fourth and we head east for number five, Vermont.

Virginia gets the least amount of federal money. Joining the Old Dominion at the bottom of the federal money recipient list are Nevada, Florida, Colorado and Georgia.

As for my native state, Texas ranked 43rd in the receipt of federal funds. So yes, relatively speaking we Lone Star Staters don't depend that much on Uncle Sam. Still, as my mother says, sometimes it's best to just hold your tongue. Again, no names.

If you don't live in one of the 11 states I mentioned here, you can find out where your state ranks in taking federal funds and the type of money it gets in the U.S. Census Bureau's most recent report on federal aid to states.

The problem with this metric is that it only includes direct payments to states and therefore ignores a lot of Federal spending. For instance, Virginia is home to lots of Federal workers (probably more than any other state) and lots of military servicemen, but the government's expenditures on those people are not counted into the report. Thats still money that the Federal government is spending in Virginia, but its not counted in the totals. If it was included, this map would look completely different.

Texas should be commended for asking for relatively little from the Federal government. That said, the report you cite studies Federal aid to states, but ignores how much the states pay in taxes to begin with, so you're only showing half the story.

According to the most recent data by the Tax Foundation (2005), Texas received $1,751,000,000 more from the Federal government than it contributed ($77 per capita). So, in reality, states like Connecticut, New Jersey, Massachusetts, Maryland, and New York (in that order) are the ones keeping Texas afloat.

As with any statistic, it depends on how you examine the numbers. Here's the FULL report:

Basically, the cost of living causes people who would be middle class in other places to look for subsidies here.

Why is the cost of living so high? In part because the other Republic won't rein in it's spending (particularly on education and social benefits) and has an awful permitting system when it comes to large scale development. Housing is quite literally in short supply in critical areas of VT.

We also are easy target for rural subsidies as it's such a small geographic area. We make a "complete" project from a grant point of view.

So I apologize to my Texas friends. We were alot more independent before the 1950's. We had a great flood in 1927 which wiped out most of our infrastructure. We refused Federal help and issued our own bonds to rebuild. I'm pretty sure those politicians would be fit to be tied if they saw VT today.

Yup, Tx ranks low in federal funds. That means your and my tax dollars are being spent in other states rather than coming back home.