Representing the rich ... or not

With every day that passes, the return of higher tax rates gets closer. And you know what that means.

No, not actual Congressional action, although one Senator said debate on the Bush-era tax cuts could begin as soon as tomorrow. (I'm not holding my breath.)

What all this attention to the impending end of Dubya's tax cuts really means is there's been, and will continue to be, all sorts of crazy numbers crunching. 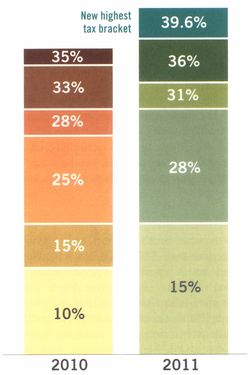 Pundits on both sides of the aisle are parsing costs to the deficit, what individual taxpayers will pay and even what it will mean to states if the individual income tax rates return on Jan. 1, 2011, to their pre-2001 levels.

Polls are being taken on what seems like a daily basis as to who supports exactly which tax cuts to keep.

And every member of Congress is under a political microscope for clues as to how each will eventually vote.

A handful of Capitol Hill lawmakers have made this investigation easier. They've come out and said just where they stand, particularly in connection with extending the lower tax rates for even the wealthiest American taxpayers.

But that, too, has prompted even more calculations.

Just who do they represent? The tax research and advocacy organization Citizens for Tax Justice (CTJ) says that most of the House Democrats who recently signed a letter in support of extending all the Bush tax cuts don't actually represent the wealthy folks who would benefit.

A new report by CTJ finds that two-thirds of the Representatives saying they're for for keeping the top tax rate at 35 percent instead of letting it go to 39.6 percent in reality represent Congressional districts that have less than the average share of taxpayers rich enough to benefit form the lower rates.

CTJ data indicates that of the 31 House Democrats supporting extension of all tax cuts:

The tax organization also produced another report with data on how residents in U.S. Congressional district would fare under the Obama proposal to extend the current income tax cuts for taxpayers with adjusted gross income (AGI) less than  $250,000 for married couples and less than $200,000 for single taxpayers and the Senate Republican tax plan to keep all the current tax rates in place.

Of course, the lawmakers could just be listening to some of those polls I mentioned. One released this week by CNBC found that most respondents believe all the Bush tax cuts should be extended, even for people making more than $250,000 a year.

I look at the deltas and ask myself, if one makes $400K and that last $150K is taxed 4% higher, $6K more, Does that individual (or couple) even notice it?
I imagine that those who have $1M+ incomes are used to it varying by more than $40K/yr, right? These people are on bonus plans and are used to variable income, no?
We (my wife and I) both work and do well. I'm ok if the last $10K gets taxed 4% more, I just want to know it's going to the right place not getting squandered.