OK. The National Association of Home Builders (NAHB) delivered the message in the headline, but the trade group says that the admonition actually comes from a recent poll of likely voters.

The poll conducted earlier this month found that three of the five tax deductions people strongly support are connected to homeownership.

The mortgage interest write-off tops the home-related tax breaks, just a percentage point behind the itemized deduction for medical expenses. 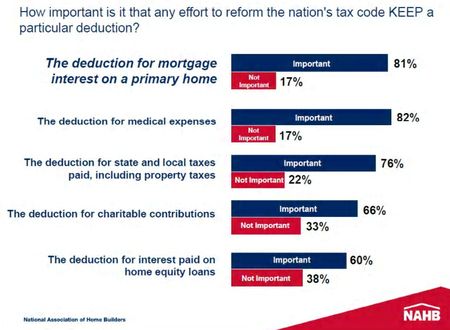 The other three deductions that polled folks want to keep are for state and local taxes (including property taxes), charitable deductions and home equity loan interest.

Thanks for the information, NAHB, but there's really nothing to worry about.

The last time the topic of ending the mortgage interest deduction got any serious consideration was back in 2005 when the President's Advisory Panel on Tax Reform, appointed by Dubya, suggested replacing this deduction with a tax credit. The report was dead on arrival.

So why do the survey? As I note in my Bankrate Taxes Blog item on this subject, Mortgage interest deduction safe (which I encourage you to check out as soon as you finish here!), politics plays a big role. That's obvious from the poll's title: Nationwide Survey of Likely Voters.

With the Nov. 2 midterm elections are coming up, what better way to keep homeownership and its many beloved tax breaks in the minds of candidates than by telling them what voters want?

The NAHB poll also was released just eight days before the first-time homebuyer credit finally expires, reminding lawmakers of the most recent tax benefit for the housing industry homeowners.

While the home mortgage interest deduction was only discussed briefly by one of the witnesses at the session to review the lessons of the 1986 Tax Reform Act, I guess the housing industry (and probably the mortgage lending sector, too) gets a little jittery whenever tax reform comes up.

And to cut them some slack,there is a tiny bit of room for worry.

Let's face it. Although the majority of poll respondents strongly support housing tax breaks, about a third of Americans aren't homeowners. Heck, with today's foreclosure rate, the ownership level has probably dropped.

And even folks who do own homes don't always get to take advantage of the tax write-offs associated with their residences.

To claim the mortgage interest deduction and all of your property taxes, you have to itemize. Most people, including some homeowners, don't. They find that the standard deduction amounts are larger than what they have in itemized expenses.

Also, folks who've paid down the bulk of their mortgage or paid it off entirely don't have a lot or any mortgage interest to deduct.

Still, the deduction and other home-related tax breaks are sacrosanct to U.S. taxpayers and politicians. The American dream and all that.

So regardless of whether the mortgage interest deduction or other home tax breaks are threatened, expect to see continued preemptive strikes -- like the NAHB poll -- to make sure they stay just as they are.