Retirement benefits war on the horizon?

In the Your Money column today, Ron Lieber predicts there's a class war coming to the world of government pensions.

The battleground, says New York Times writer Lieber, will pit state and municipal retirees with "seemingly guaranteed and ever-escalating monthly pension benefits [that] are breaking budgets nationwide" against taxpayers whose 401(k)s or individual retirement accounts have taken a real beating in recent years.

"And soon, many of those people will be paying higher taxes or getting fewer state services as their states put more money aside to cover those pension checks," writes Lieber.

He cites a Pew Center on the States report that estimated, as of fiscal year 2008, a $1 trillion gap between what states had promised workers in the way of retiree pension, health care and other benefits and the money they currently had to pay for it all.

The recent outrage by Bell, Calif., residents over their very, very, very highly paid public officials also shined a harsh light on that state's public pension program. Many, including those of us not living in California, were shocked to hear of the incredibly generous pensions -- between $15 million and $30 million -- that the recently-ousted city workers could one day receive.

The way the Golden State's system is set up, every former taxing jurisdiction where the fired Bell employees worked will bear a portion of the pensions. And the cities and counties just have to deal with those payouts when the former worker retires.

Taxpayers in the various places where the Bell city officials works are keeping their fingers crossed that an attorney general's investigation might exclude the former employees' latest high salary amounts from their pension calculations.

Colorado also was facing high public employee pensions, but, reports Lieber, lawmakers there decided to do something about payouts the state says it can no longer afford:

"Earlier this year, in an act of rare political courage, a bipartisan coalition of state legislators passed a pension overhaul bill. Among other things, the bill reduced the raise that people who are already retired get in their pension checks each year."

This being America, legal action ensued. Retirees and those eligible to retire sued Colorado  to keep all of the annual cost-of-living increases they thought they would be getting in perpetuity.

On Twitter, Lieber takes the pension promises argument a step further, wondering "when is an enterprising young person going to refuse to pay into Social Security and sue saying it's a sham?" 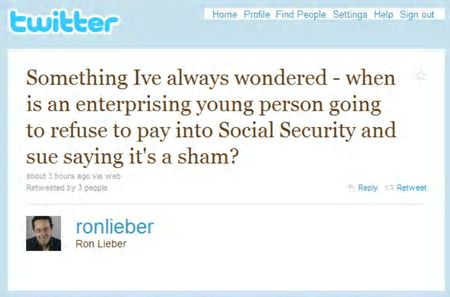 At the risk of giving folks ideas, it's a good question. We already have a large contingent of general wackos tax protesters wackos, including individuals who refuse to file their annual 1040s, as well as employers who won't collect payroll taxes, including FICA amounts, from their workers.

A lawsuit is the only option since, practically speaking, an individual can't opt out of FICA's Social Security and Medicare tax withholdings. Sure, you can file a new W-4 to reduce income tax payroll withholding, but FICA amounts are taken out separately, without any paperwork from you.

The only workers I know of who are exempt from FICA are foreign students studying in the United States and working under a practical training visa. Social Security and Medicare is still withheld from their wages, but they can file for refunds of it.

And if you hold multiple jobs and have too much Social Security taken out, you can get those excess payments back when your file your tax return.

But to get back to Lieber's hypothetical, I could see some Saul Goodman type behind a class action, but in reality, who really wants to foot the legal bills for what will most assuredly be a lost cause?

Still the tension between public and private retirees, as well as the generational concerns of workers about what they will or won't get when they're ready to quit work, is an issue that needs to be dealt with sooner rather than later.

WOW!
good that I am paying my Social Security fund... but I have other pension plan to make sure that I can live the life I dream of.

We are often told that Social Security pensions will have to be reduced in the future even though private employees and their employers have been paying into the system for decades. This reduction will be through actual reductions in promised Social Security payments, "means testing," or an increase in taxes on these pension benefits. If this happens, how can public employees claim that their pension benefits are sacrosanct? If there has to be a huge federal bailout of the many bankrupt state and municipal pension plans, these various government plans can be taken over by the federal government with a extra federal tax on government pension income that will be needed to pay for this. This tax should be very "progressive" so that it hits the highest government pensions the hardest. Our rulers can't demand more sacrifices from the peasants than they have to make. Otherwise, there will be a revolution.