If you drive a car, have a nicotine habit or buy things, you're probably paying more this year.

The tax services company CCH conducts an annual survey of state consumption taxes and the 2010 data indicates that many cash-strapped states are hiking sales, gas and cigarette taxes.

"From the increases in consumer taxes, it's evident that many states are trying to shore up revenue shortfalls," said Daniel Schibley, CCH senior state tax analyst. "Many other states have not yet increased taxes, but may do so."

CCH found that as of July 1, five states increased their gas taxes, five hiked state sales taxes and 11 bumped up their taxes on cigarettes.

The District of Columbia also increased its taxes across all three consumer tax categories, joining North Carolina, which is the only state to also hike taxes in all three areas.

Just one state, Florida, reported a tax reduction. But don't get too excited Sunshine State residents. The state's gas tax went from 16.1 cents to 16 cents per gallon. While every tax penny, or portion thereof, saved helps, this fractional cut of gas taxes won't get you much farther down I-95.

And as the CCH map below (click the image or here for a larger view) shows, the rates in each consumer tax category vary widely across the country. 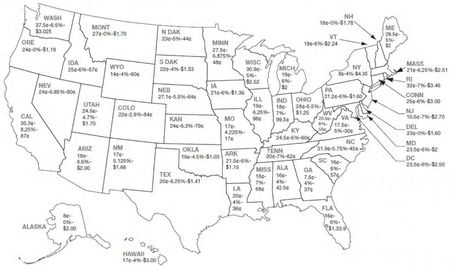 The three figures for each state are, left to right, (1) the basic state gasoline tax rate per gallon, exclusive of sales tax, various environmental taxes and fees, local taxes, and license and inspection fees; (2) the state sales tax rate ("0%" indicates that state-level sales tax is not levied), including a 1 percent statewide local rate in California and Virginia; and (3) the state cigarette tax rate per pack of 20. Local taxes may apply in certain jurisdictions, but are not reflected. Any rate changes effective July 1, 2010, but not announced by press time are not reflected.

Gas prices down, but gas taxes up: The price at the pump has headed downward in the past few months, but gas taxes have gone up in five states: California, Kentucky, Minnesota, Nebraska and North Dakota, as well as the District of Columbia.

In some states, the rate hike was negligible, as in Minnesota where the levy went from 27.1 cents to 27.5 cents per gallon.

Golden State drivers, however, weren't so lucky. California's gas tax over the past year has nearly doubled, going from 18 cents to 35.3 cents per gallon.

Sales taxes at all levels rise: Sales taxes are major revenue sources for the states that have them, and are often an important funding source for cities and counties, as well.

Sales tax increases over the past year ranged from incremental in states like New Mexico, which went from 5 percent to 5.125 percent, to Massachusetts' "what the…" jump from 5 percent to 6.25 percent. No wonder Bay Staters pushed for a tax holiday!

In all, 26 states and the District of Columbia now impose a sales tax of 6 percent or more.

And remember, in many places the state levy is just part of the purchase price. Counties, cities and other local jurisdictions add their own sales taxes on top of the state sales tax.

But the nation's top big-city sales tax (dis)honors are shared by Chicago and Los Angeles, which each impose a 9.75 percent combined rate on shoppers.

One of the biggest percentage increases came from traditional tobacco country. South Carolina's cigarette taxes went from 7 cents per pack, the lowest in the nation, to 57 cents.

Four other states raised everyone's favorite sin tax to $3 or more per pack over the past year: Connecticut, Hawaii, Rhode Island and Washington.

And as with sales taxes, notes CCH, statewide rates might not be the end of the story. An increasing number of cities and counties, as well as the federal government, impose additional taxes on tobacco products.

Cigarette taxes a re a funny thing.. Are they aimed at making smokers quit or at increasing tax revenue... I mean if less smokers smoke then less smokers buy cigarettes so less tax revenue. Silly? Anyway I use an e-cig now... Much better and affordable. The one brand I like has more info on e-cigs in general on their website http://thevapormaster.com