Got credit card rebate cash piling up in your account but nothing really catches your buying fancy?

Then donate the plastic-produced money to your favorite charity. 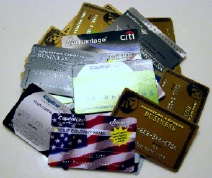 Not only does the IRS say it's cool with that philanthropic move, the tax agency says you can deduct your rewards rebate donation.

The only thing you have to be careful about is complying with existing charitable donation rules.

This means, first off, that the charity getting your rebates is an IRS-authorized organization.  A couple of credit card issuers, according to the Wall Street Journal, already have rewards donation systems in place; the newspaper specifically cites Discover and Wells Fargo.

The cardholder also must voluntarily and affirmatively participate in the program. That means, according to the IRS private letter ruling (issued in April but just recently made public), that:

"Taxpayers will have the option of receiving credit card rebates as cash or, in the alternative, will have the option of allowing [the credit card] Company to pay the rebate amount to a charity that Taxpayers choose from a list of participating charities, all of which are organizations described in § 170(c) ("charity"). The option to receive rebates in cash or have the rebates paid to a charity is made at the time Taxpayers open the credit card account. However, Taxpayers may change their option at any time by contacting Company."

And don't forget the proper substantiation. As with any other charitable contribution deduction, the documentation needs to include the:

If that info can be shown on the credit card statement, great. If not, you need a separate letter from the charity, just like is required when the donation is more than $250.

Technically, this letter ruling is, as its name indicates, just for one private taxpayer's situation. However, such decisions typically give a glimpse into how Uncle Sam views similar, broader tax circumstances.

It's great to see the IRS, which for years has accepted and even implicitly encouraged taxpayer use of plastic to pay tax bills, finally agree that our use of credit cards and other giving methods such as text message charitable donations, are OK with the agency, too.

Bonus IRS ruling: In addition to clarifying the rewards donation situation, the IRS also reaffirmed the consensus on whether credit card rebates are considered taxable income to cardholders who get them.

While the feds typically want a piece of just about everything else, the private letter ruling says:

"Section 61 [of the U.S. Internal Revenue Code] provides that gross income means all income from whatever source derived. A rebate received by a buyer from the party to whom the buyer directly or indirectly paid the purchase price for an item is an adjustment in purchase price, not an accession to wealth, and is not includible in the buyer's gross income." (emphasis mine)

So whether you spend the rebate money or give it away, the one thing you don't have to worry about paying taxes on it.

That's what most tax folks thought, as I noted in a story on the taxability of credit card points. But it's nice to have additional word on the matter from the IRS.