Jon spends almost as much time thinking about retiring as he does working.

OK, Jon's boss, in case you're reading, he swears that he spends a little more time on his job responsibilities. 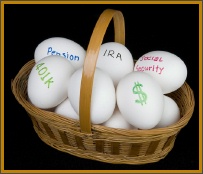 But he is committed to being able to retire on his terms: When he wants with the lifestyle he wants.

If you have a workplace retirement plan such as a 401(k) or 403(b), contribute as much as your budget will allow. Ideally, that's enough to meet your employer's matching contribution (although many have stopped matching, some still are).

The beauty of these defined contribution accounts is that the money goes from your pay to the account before any taxes are taken out via withholding.

Plus, the earnings are tax deferred; you don't pay the IRS until you begin taking distributions.

Some folks prefer (or are required because of earning limits) to have a traditional IRA. Others like this original personal retirement plan because it offers the option to claim a deduction at tax filing time.

Like the 401(k), taxes on a traditional IRA's earnings are postponed until you take the money out. The hope is that by that time, you'll be in a lower retirement age tax bracket so the IRS won't get so much.

Sure, with a Roth you put in already-taxed dollars, but that's it. Your earnings grow tax-free. You don't have to pay any taxes on your distributions as long as you've had the Roth at least five years and you're taking out the money once you turn 59½.

Starting this year, many traditional IRA owners who previously couldn't convert those accounts to a Roth can do so because the $100,000 earnings limit is gone.

And this year only, you have the option to defer your taxes on any converted traditional IRA money into future tax years.

Check out the conversion option. It's not for everyone, but you don't know that until you run the numbers.

Regardless of which retirement plan you have, follow Jon's suggestion and contribute to it now.

If you haven't opened a 401(k) at work, find out when you can. If you already contribute to one, bump up the contribution as soon as you can.

As for your IRAs, sure you can wait until the tax year's filing deadline (April 15, 2011), but the sooner you put in money, the sooner it starts earning.

And the sooner it starts earning, the more money you'll have to ensure just the type of retirement you want!

More midyear tax tips on their way: Thanks, Jon, for the retirement planning reminder to include as part of our first Midyear Tax Moves feature.

If you have a tax move we can make now to help reduce an upcoming 2010 tax bill, we'd love to hear from you. I'll be posting the tips, one each weekday until we run out.